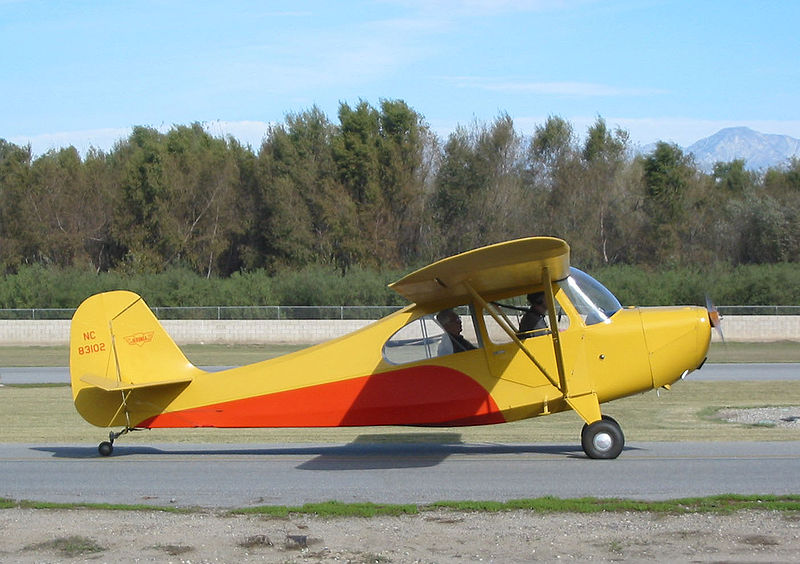 The Aeronca Champ is one of the most classic of airplanes from the 1940s. As with most of the old airplanes from that era, the Champ was able to fly based on a very fine balance between large wing area and “just enough” horsepower. Officially designated the 7AC, the airplane was the counterpart to the 11AC Chief, which was the side-by-side version of the Champ series.

The Champ had those who loved her and those who hated her, as with all the aircraft that came out right after the war. There were “purist pilots” who thought the only airplane suitable for learning how to fly was Mr. Piper’s J-3 Cub.

While the Cub was a great airplane, the Champ was just as good. The main difference between the two was that the Champ had more room in the cockpit than the Cub. Overall, it was a much more comfortable airplane—especially if you were going to spend any length of time sitting in it.

With a Cub, the solo student pilot had to sit in the backseat for center-of-gravity reasons. The student flying a Champ, however, could sit up front and take advantage of the great view afforded by the overly large windscreen. Additionally, the pilot sitting in the front of a Champ had more legroom than those flying in the front seat of a Cub.

In the realm of performance, the Champ took the lead with a cruise speed of 85 mph (back in the old days, they used mph instead of knots). The Cub, with the throttle set at the same 2200 rpm setting as the Champ, would only cruise at 75 mph. Both airplanes used the Continental C-65 engine of 65 horsepower and consumed a measly 4.0 to 4.5 gallons per hour.

With an empty weight of 740 pounds, the gross weight of the airplane tipped the scales at 1220 pounds.  This gave the airplane a useful load of 480 pounds.  The fuel capacity of 15 gallons in the main tank and another 8 gallons in the auxiliary tank, located behind the aft seat in the baggage compartment, gave the airplane enough fuel for about 350 miles. With both fuel cells filled, this accounted for 138 pounds of fuel, leaving 342 pounds of useful load available for pilot, passenger, and luggage.  Champ pilots tended to travel light.

Flying the airplane is a delight. She has very well balanced controls and handles, well, like a Champ. Uhmmm… I wonder if that is where that saying comes from.

She is a very honest-flying airplane, as are most of the airplanes of that era. With fairly large ailerons, a pilot must absolutely counter adverse yaw properly. If it is one thing this airplane will do, along with the other taildraggers of the time, it will teach neophyte pilots how to use rudders—in flight and on the ground.

Slow flight and stalls are very straightforward. The Champ, with its generous wing area, has no problems flying at very slow airspeeds. Stalls are gentle and as long as the pilot keeps the ball centered, the airplane does not dip a wing or tend to fall off one way or the other.

Landings of course, are easy, for a taildragger. With the big-screen windshield and the lower nose cowling, seeing where the airplane is going is easy. Beyond that, ease the nose up over the fence and let the airspeed bleed off with the wheels just above the ground. If you keep trying to hold the airplane in the air two inches above the ground and never let the stick go forward after you program it back, nine of ten times, you are going to have a near-perfect landing.

Just keep that stick back and use the rudders to keep her straight on the centerline.

3 Responses to The Aeronca Champ