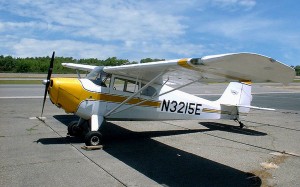 She is another one of those classic airplanes. As with most airplanes coming into production after the war, the Aeronca Chief was an airplane as perfect for personal use as she was for flight training.

Not as popular as some of the other models of the era, the Aeronca 11AC Chief turned out as delightful an airplane at the time as she is today. She hit the market about the same time as with her sister ship, the Aeronca 7AC Champ.

While the Champ featured tandem seating and control sticks, the Chief had side-by-side seating and control wheels, or yokes, for controlling the elevators and ailerons. Another way to look at it, the Champ was for serious airplane flying, and the Chief was an airplane you could take your best girl out and enjoy sitting next to her, rather than in front of or behind her. The Continental A-65 engine of 65 horsepower originally powered both airplanes.

Raymond Hermes of the Aeronca aircraft company originally designed the Chief. By the way, Aeronca is a contraction of the Aeronautical Aircraft Company, at the time, located in Middleton, OH.

As for speeds, the two-seater tipped top speed at 105 miles per hour, according to the manual and company records. In real life, the airplane flew just a little slower. Company literature has the airplane cruise performance as 90 mph, but in reality, with the power reduced just a little for fuel flow considerations, you can depend on a cruise speed of 80 mph with a fuel flow of 4.5 gallons per hour.

According to the service manual for the airplane, all they did for consumption performance was estimate the fuel flow at five gph. Then, with a cruise speed of 90 mph, the normal fuel capacity of 15 gallon would carry a pilot and his or her passenger 270 miles. With the eight-gallon auxiliary tank filled, the airplane had 23 gallons and pilots could count on 420 miles in no-wind conditions.

In flight, the airplane was one that would teach pilots well. During turns, adverse yaw required the exact and proper use of the rudder. Keeping the ball centered is just as important in the Chief as any other airplane. As with all taildraggers, pilots have to fly the airplane all the time, especially through the landing, but the 11AC is not a “nasty” taildragger. The Chief would allow pilots to make their mistakes while gently reminding them to fly right.

Like all those airplanes that hit the market right after the war, the airplane was a delight to fly. She handled well; takeoff was straightforward and as with all of those old airplanes power by the Continental 65, climb performance was, in a phrase, not blazing. Three hundred to 400 feet per minute in the climb was standard and keeping track of the critical angle of attack was paramount.

Landing the airplane was easy, for a taildragger. Pilots could fly the pattern at 70 to 80 mph, slow to 60 on final, and then cross the fence at 50 to land at 40. And of course, don’t forget the “rudder dance” to keep the nose tracking straight and true down the runway.

If you have the chance, go fly the airplane. You will enjoy every minute of it.

7 Responses to The Aeronca Chief