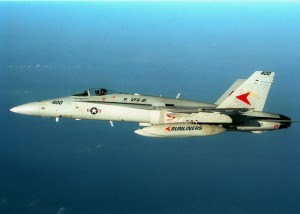 Today, 20 years ago on January 17, 1991, Operation Desert Storm began. Onboard the USS Saratoga, men prepared to go to war and they would be some of the first warriors over the beach. VFA-81, the Sunliners, was one of the F/A-18 squadrons based aboard the Sara and one of the officers of the Sunliners leading the way was LCDR Michael Scott “Spike” Speicher.

Scott Speicher, a native of Jacksonville, FL, was a Sunday school teacher, a husband, a father, a neighbor, and all around good guy. His roommate on board the ship, Tony Albano, spoke of the anxiety each of the pilots felt before the first mission, saying they suffered from sleeplessness. Another pilot described the situation as, “very nerve-wracking.” After all, the pilots had never been in combat, none had ever had bullets, missiles, or other weapons fired against them before.

The Commanding Officer of the ship, CAPT Joseph Mobley, briefed each of the squadrons, passing on his wisdom from his own war 23 years prior. While flying as an A-6E bombardier-navigator, his aircraft went down on June 24, 1968 over North Vietnam. He spent the next five years as a prisoner of war.

CAPT Mobley briefed all the warriors preparing to fly missions, giving them the benefit of his experience. They would fly the first missions of the war; they would be the first over the beach into Iraq. They had an intense responsibility.

The air plan called for the first mission to launch in the dark, late at night. The pilots of the Sunliners and their sister squadron of VFA-83 the Rampagers, finished their briefs, grabbed their gear, signed the yellow sheets, and manned up.

The war was on.

The pilots of the Sunliners and Rampagers as well as other combat units throughout the theater gained invaluable experience in combat that night. The night was uncommonly successful; casualties were very low.

As with all combat ops, the adrenalin ran high, the men were excited and after weapons release, they began returning to their ships. In the darkness of the night, Spike Speicher did not check in. The other pilots did, but Speicher seemed to be lost.

His squadron mates prayed that it was a malfunctioning radio and that he would return to the ship to fly a NORDO procedure to get back aboard. Time passed. Time beyond what Spike’s fuel would allow him to fly.

It soon became evident that Scott Speicher was a combat casualty. He was the first loss of the war.

He would remain lost for years, declared dead, reclassified as a POW. Many feared Spike lived a horrible life as a prisoner for almost two decades. Finally, in April 2009, rumors and speculation ended.

The Navy finally found Scott Speicher’s remains, buried in the desert by Bedouins. After interviews with natives who witnessed the incident, officials determined Spike did not survive the shoot down.

LCDR Speicher, posthumously promoted to the rank of Captain, remains one of America’s finest heroes.

6 Responses to The First Casualty