The Front Side and the Backside!

One of the more complex concepts for students or inexperienced pilots to grasp involves flying on the “front side” or the “backside” of the power curve.  On the front side, everything seems to be working normally while on the backside, things work in “reverse.” 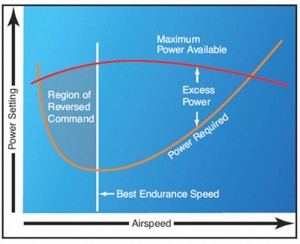 The region of reversed command

On the backside the power curve, or in the region of reversed command, things are different.  If you have the aircraft stabilized at any speed less than best endurance, the airplane will behave in a manner which may seem odd.  Essentially what happens is this: when you pull back on the stick increasing the angle of attack on the wing, you create more drag than lift.  This will cause the aircraft to descend.  To maintain level flight, you must increase power to compensate for the increased drag.  If you do not, the aircraft will descend in altitude even though you have the nose pointed higher.  In this situation with fixed power in the area of reversed command, when you pull up the nose, the airplane will begin descending.  If you lower the nose, the aircraft actually starts to climb.

The speed required to land an airplane is near the best endurance speed.  Most general aviation aircraft pilots as well as airline pilots will fly their landing approach at a speed on the normal side of the power curve.  The aircraft responds more rapidly to pitch changes on the front side of the curve compared to the back side.  Navy pilots flying tactical jet aircraft landing aboard a ship must fly on the backside of power curve for specific operational considerations.  Basically, they have to get slow enough to land on the ship and the placement of the tailhook is dependent on the high pitch attitude created by flying in the region of reversed command.

For most general aviation aircraft, the approach speed typically falls near the best endurance speed.  Adding a couple knots will keep the airplane on the front side of the power required curve.  For new pilots, the thing to keep in mind is to be aware of where they are on the power curve during their approach to land.

And then push or pull appropriately, regarding pitch and power.

5 Responses to The Front Side and the Backside!