Following on the heels of yesterday’s blog, I need to let you know how to “stretch it.”  Now, let me explain: I am not talking about stretching a glide or your gas supply.  What I am referring to is getting the most miles per gallon of your available fuel.

Quite a few pilots have little idea of how to use their fuel in the most efficient manner.  It is quite an accomplishment to squeeze the last bit of mileage out of a drop of gas; I take great pride in getting 93,000 miles out of a set of 80,000 mile tires.  It’s the same with 100 octane low lead.  The more hours I can fly on the fewer gallons of gas (especially at $4+ per gallon), the better.

When it comes to flying many inexperienced pilots are all about getting to their destinations as fast as possible.  The movie Top Gun introduced the term, “I feel the need for speed.”  It seems to have become the mantra of young pilots today.  I never could quite understand why student pilots who need to build flight experience and log flight time, were flying around as fast as they could just to burn up gas.

One day at the University of Florida, I witnessed a man who was about 65 to 70 years of age challenge a 21 year-old to a game of racquetball.  The college student was not interested in playing the old man but the senior finally pestered the kid enough until the kid gave in.  For all his youth, stamina, strength, and agility, I was very amused to watch the older man use his skill and intellect to utterly destroy his youthful opponent by a score of 21 to 2.  The poor student ran all around the court while the old man stood near the center of the court deftly popping the ball into the corners.  He barely broke a sweat.

Flying a cross country should be the same way.  Today’s inexperienced pilots remind me of that college student using all muscle and brawn to go nowhere fast.  The smart pilot, on the other hand, flies like the elderly racquetball player.  He uses his street smarts to get the most out of his airplane.

For cross country planning, pilots should take advantage of altitude, power setting, and the winds to pinch out as much mileage as possible from their fuel.

When it comes to altitude, 5500 to 8500 feet MSL is typically the most optimum altitude for cross country flying.  The air is thinner and it is cooler in that range allowing the airplane to operate more efficiently while providing a more comfortable ride for a pilot and passengers.

When it comes to the power setting, flying at higher altitudes naturally allows the engine to run at a lower power setting due to the lower density altitude.  As a consequence, the indicated airspeed is closer to L/Dmax because of the thin air.  With the airspeed nearer to L/Dmax, the airplane flies more efficiently.

Finally, we need to take the winds into account.  To get the most mileage out of your aircraft, take a look at the wind component as it relates to a headwind or a tailwind. 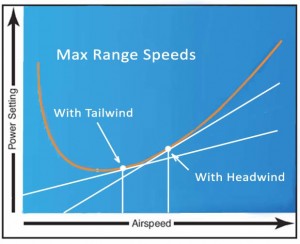 Going back to the basic power required chart, you can find the maximum endurance speed at the lowest point of the curve.  The maximum range speed is determined by drawing a straight line from the origin until it intersects with the bottom of the power required curve.  Now keep in mind, this velocity is only good in calm winds; if you have a tailwind, the line needs to originate at a point to the left of zero equal to the velocity of the wind.  If you are fighting a headwind, you need to draw the line starting at the velocity of the wind from a point to the right of zero.