Over the weekend, a legitimate miracle took place at the Lake Clark National Park in Alaska. In the designated pass, a Piper Navajo and Cessna 206 floatplane came together in the crunching of metal and no one died. In fact, what made this event a miracle was that no one was even injured.

The Navajo was ferrying passengers from outlying villages to Anchorage and there were nine aboard the aircraft. The floatplane was a charter by a family out sightseeing and viewing bears.

One aircraft was northbound through the pass and the other was opposite direction. Neither pilot saw the other until perhaps the last possible moment. The vertical fin and rudder on the Navajo made contact with the floats on the 206. Damage was minimal and in the case of those on the Navajo, no one realized there was a collision. They knew they hit something, but they thought the affair was something along the lines of a bird strike.

On Monday, Federal Aviation Administration (FAA) spokesperson Mike Fergus said this collision was a very rare event. He went on to say in the case of midair collisions, surviving a midair collision “is almost unheard of.”

To understand what happened Sunday in the Alaskan skies, you have to study the chart. The pass is a very narrow, well-travelled pass connecting Anchorage with the area to the southwest. Authorities report the pass is as narrow as a quarter-mile in some places. 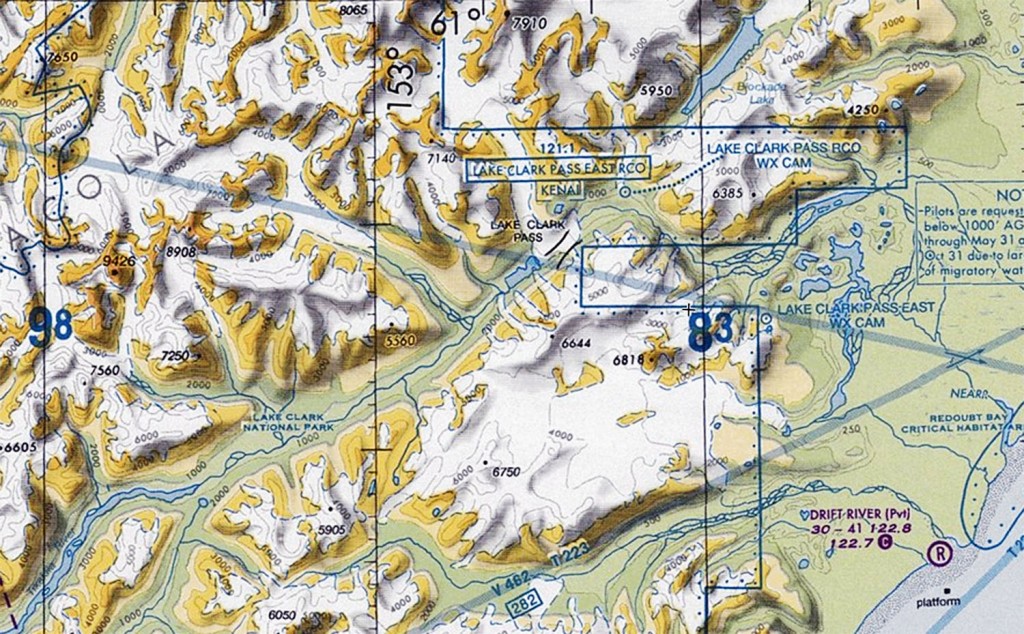 The two aircraft were approaching each other head on, reducing their visual profiles to the opposing pilots. The Cessna was only slightly higher than the Piper and both airplanes were operating near 2300 MSL. From the charts, the mountains climb to the 8000 to 10000 foot level on the north side of the pass while to the south, they are about 6000 MSL. From studying the topography, you can see how pilots would naturally funnel their airplanes through the same airspace.

While the FAA and the National Transportation Safety Board (NTSB) continue their investigation, this incident brings to mind one of the most important tenets of operating an aircraft: always maintain a vigilant lookout for other aircraft in your vicinity. Pilots cannot afford to relax their outside scan for any reason.

Some of the uninformed will ask why Air Traffic Control (ATC) did not issue warnings to the pilots. The answer to this is simple. Out in the mountainous area of Lake Clark, there is no radar coverage because the mountains block the radar returns. This is why it is so important for pilots to see and avoid one another.

With regard to midair collisions, each year there are approximately 30 collisions resulting in about 75 fatalities. There are about 450 reported near misses.

As we move further into this latest century and avionics engineers invent even more sophisticated electronics, pilots would do well to keep to the basics—such as looking outside of the aircraft instead of “watching TV” on the inside. We have a tendency to depend on the technology “to keep us safe.” It gives some pilots a warm and fuzzy feeling to know they have radios, traffic avoidance technology, and other things requiring electricity to operate. In fact, a few will refuse to fly if they do not have their technology.

Unfortunately, the technology does not have the capacity to keep those pilots as safe as they wish. What those pilots lack is the self-confidence of knowing they can keep themselves safe in the air on their own—and—even safer when they have the chance to use technology correctly.

What keeps us safe is … us.

Note: Email subscribers, please go to my blog to view vids and photos