Posted on April 17, 2011 by Joe Clark
Today, 47 years ago, Jerrie Mock returned from her trip. It was a special trip and she was no passenger. She was the pilot. And the only one onboard her 1953 Cessna 180 she named the “Spirit of Columbus.”
Oh, by the way, what made her trip so special was the fact that it was the first solo circumnavigation of the globe by a woman aviator.
For this very special accomplishment, the Fédération Aéronautique Internationale awarded her their Louis Bleriot Silver Medal. She won the Gold Medal for Exceptional Service from the Federal Aviation Administration, awarded by President Johnson in the Rose Garden. She also won the Amelia Earhart Memorial Award, among others.

Ms. Mock wrote about her adventure in her book titled Three Eight Charlie (Lippincott, 1970). It is a fascinating story. The publisher put the book out as a hardcover edition and there was only one print run. Today, it is a collector’s item commanding asking prices in excess of $400 on the current collector’s book market.

One amazing fact about her flight and her story is that it took place in 1964. It is astounding no other woman aviator made this flight earlier than 61 years after the event of the First Flight at Kill Devil Hill, or sooner than the quarter century that passed since Amelia Earhart was lost.

This must have been a fantastic adventure for Ms. Mock, at the time a 38 year-old mother of three. She departed Columbus, OH on March 19, 1964 and her trip around the world took 29 days and traversed 22,860 miles. In her book, she detailed much of the engineering requirements to make the Cessna ready and capable of flying around the world. She also discussed all of the political aspects and problems with acquiring permissions from various countries for over flights of their territories.

How did she make her mind up to fly around the world? Well, it actually started with her husband. He would occasionally ask her, “Why don’t you fly around the world?” She evidently decided it was a pretty good idea and she could possibly do it; she studied the feasibility of the project and started working on outfitting her Cessna with a new engine and radios, as well as another fuel tank to increase the airplane’s range well enough to cross oceans.

Once she made up her mind to fly the trip, to become the first woman to solo around the world, she had to hasten her departure because another woman pilot started preparing to do the same. As a result, Jerrie’s flight became similar to Lindbergh’s flight across the Atlantic in that it actually turned into a race.

On the trip, Mock had to battle common problems always found in aviation. There was a rough running engine, bad weather, fatigue, radio malfunctions, and more. In all, she stopped in and visited 14 countries on her trip. 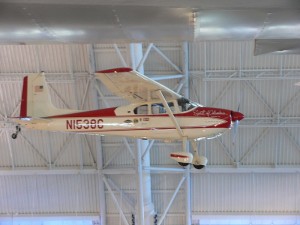 The Spirit of Columbus hangs in the Steven F. Udvar-Hazy Center of the Smithsonian Air and Space Museum / Mark Pellegrini, Wikipedia

Mock’s competitive spirit did not end with her solo circumnavigation. She went on to compete in aviation attaining other records.