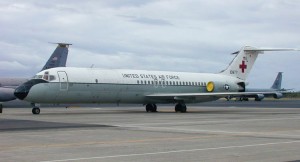 Forty-six years ago today, the DC-9 flew for the very first time.  Douglas Aircraft began researching the need for short- to medium-range airliners in the late 1950s.  The original thought was to design a smaller version of their popular DC-8, complete with four engines.  The airlines did not show enough interest in that particular design and the engineers and managers at Douglas began rethinking their ideas.

In 1960, Douglas connected with Sud Aviation in a program in which they would provide marketing and support for Sud’s Caravelle aircraft.  Over the following two years, there was no interest in the Caravelle, prompting Douglas to return to the idea of a different but short-range jet.

During the 18-year production run of the aircraft, 976 DC-9s came out of the Long Beach Division of Boeing Commercial Airplanes.  McDonnell Douglas delivered the last DC-9 in October 1982.

Characteristics many airline companies found attractive in the DC-9 included the integral boarding stairs and low ground clearance.  This provided passengers with easier access for boarding and deplaning and ground crews were able to load and unload cargo without special equipment.  These features, combined with the airplane’s short field capabilities, made it the perfect airliner for smaller operators.

Although not produced in as many numbers as the company’s famed DC-3, the DC-9 made its own mark in aviation history.  This year, the fleet of DC-9s continues to work throughout the world.  Each day the model flies more than 3500 flights providing the operators more than five hours of revenue operation.