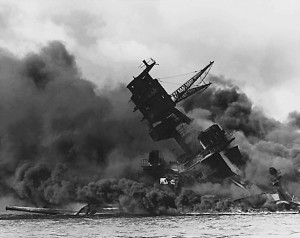 The Start of World War II

It is hard to believe it has been 69 years since the Japanese attack on Pearl Harbor. Eighteen year-old newly enlisted sailors, who were there when the Japanese bombed the harbor, are today, 87 years old. There are some 3000 survivors left, but time is taking a toll on their ranks.

December 1941 and the following months presented America a terrible time; over the course of the next four years, more than 60 million throughout the world would die in the war. Atrocities abounded as man’s inhumanity took the forefront in the newspapers, magazines, combat reports, and old-fashioned conversation between family and friends.

During this time, Americans and other free people throughout the world felt lost and without hope. Something needed to happen and ordinary citizens stepped in to pick up the yoke and carry the load. Men went to war and the women who loved them began working their jobs and other industrial positions to stop the Japanese and Germans.

The Japanese dealt a terrible psychological blow to the Americans. At the time of the attack, our nation was ill prepared and not ready for war. We were – well, sleeping.

Many believed we should mind our own business; there was a very strong voice for isolationism. Conceptually, it’s a grand idea, but in reality, it doesn’t stand a chance.

For those having a hard time grasping this concept, all you need do is take an inconspicuous position to watch what goes on during recess on a grade school playground. As much as any child bullied would like to avoid the bully, it is quickly quite evident avoiding bullies is in reality, impossible.

If the playground bully wants to steal your lunch money, he is going to do it and you will not have a say otherwise. The only way to stop bullying is for the bullied child to punch the bully in the nose. At the beginning of 1942, this was exactly the position the United States faced. Japan wanted our lunch money and it was time for us to stand up to the bully.

The first thing we did was to punch the bully in the nose with a bombardment strike against Tokyo. On April 18, 1942, Lieutenant Colonel James H. Doolittle led 79 other volunteers against Japan. In short order, the Japanese became aware they were not as isolated as they once believed.

All but one aircraft of the 16 used in what would become Doolittle’s Raid would be lost. Doolittle considered the raid a dismal failure, fearing court martial on his return to the United States.

For as much as the Japanese bloodied our nose on December 7, the Doolittle raid proved to be an immeasurable psychological boon to the American military as well as the American people. When we were devastated at Pearl, many thought the Japanese would soon win the war. Many political pundits and educated professors believed we had the fight knocked out of us.

Obviously, they were mistaken.

Today, the USS Arizona still lies in the shallow waters of Pearl Harbor and is a tomb for 1177 Navy men who lost their lives 69 years ago. She still bleeds oil into the harbor, and many of the survivors of the ship’s company believe that when the last of their number die, the ship will stop leaking oil. 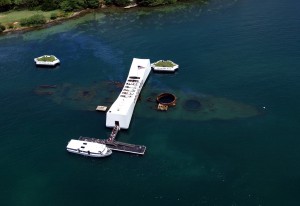 For those who survived the attack, they have the option of entombment of their ashes within the ship with their fellow shipmates upon their death; for those who ever served as ship’s company, they can have their ashes scattered over the waters of the memorial.

These men were a special breed of Americans. They are what defined the American spirit at the time we entered World War II. They are the same as the soldiers who stood watch at Bunker Hill, who fought at Gettysburg and Shiloh, who stormed San Juan Hill, and fought at the Battle of Belleau Wood. Their traditions are carried forth today by service men and women who remain steadfast in defending us against the threat of terror.

To all of you still on watch, we are a grateful nation. We know that without you, we would not be, we could not enjoy our lives.