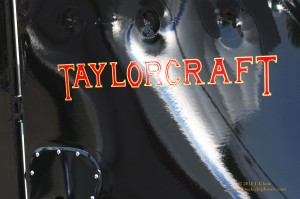 Yesterday’s blog was about The Perfect Flying Machine.  Today, it is about a very similar flying machine.  The reason it is very similar is because the same aeronautical engineer, Clarence Gilbert Taylor, designed today’s airplane, the Taylorcraft.

After the big falling out with William Piper, Taylor decided to start another aircraft company, promising to build an airplane even more popular than the Piper Cub.  Today, you can find the headquarters of the Taylorcraft Aviation Corporation located in Brownsville, TX.

Unlike the Piper Cub, the Taylorcraft seated the pilot and passenger side by side.  It also sported control wheels instead of control sticks.  With the same horsepower, the airplane cruised about 10 mph faster than Mr. Piper’s Cub.

Construction technique on both the Cub and the Taylorcraft were similar.  The fuselage structure consisted welded 4130 chromoly tubing with wooden formers covered in cotton linen.  Linen also covers the wings of which the structure consists of a forward and aft spar with truss-type ribs.

Flying the airplane is very straightforward, very similar to flying a Cub.  The airplane’s long wingspan allows the airplane float quite a bit on landing.  In other words, you have to plan your approach accordingly and control your final approach speed well.  Any excess airspeed would extend the float well down the runway while you are trying to land.

In the air, the airplane flew very well.  The airplane is very honest in maneuvering, slow flight, and stalls.  Like the Cub, the airplane spins well and recovers quickly when asked. 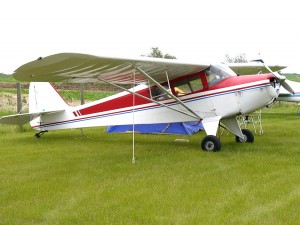 Both airplanes, the Cub and the Taylorcraft, are uncomfortable.  If a pilot has to sit in the airplane any great length of time, he or she will have a tough time getting out.  Oh, by the way, getting into the airplane is also difficult.  For the Cub, backseat entry includes stretching across the stick the far side of the cockpit; the same as required of the front cockpit with lesser space.  In the Taylorcraft, there are doors on both sides for entry, but they are rather small.

Basically, you must be an advanced contortionist to enter or exit either airplane.  Once situated, however, both airplanes offer pilots and passengers alike a ton of fun.