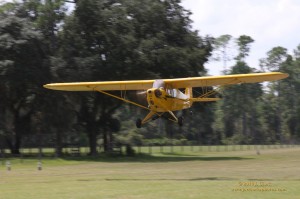 Every time an airplane makes the news, someone makes a comment about the “Piper Cub.” Now the airplane might have been a Cessna 210, a Beechcraft A-36, maybe even a King Air, but for many in the public, if the aircraft is smaller than a Boeing 700 series airliner, it is a “Piper Cub.”

So many people are ignorant of the Piper Cub. The airplane is a wonderful machine which has trained hundreds of thousands, if not a million pilots how to fly over the decades since its inception. There is no way to truly tell, no one kept numbers the way we record them today.

The Piper Cub actually started life as the Taylor E-2 Cub in the early 1930s.  Clarence Gilbert Taylor was the designer of the Taylor E-2. Taylor was a self-educated aeronautical engineer from Nottingham, England.  He and his brother, Gordon, formed the Taylor Brothers Aircraft Corporation in Rochester, NY in 1926.  When Gordon died in 1928 during the test flight of a new aircraft design, Clarence moved the company to Bradford, PA.

It was in Bradford where Taylor created his E-2 model.  William T. Piper became one of the predominant investors in the new airplane and the company.  When Taylor was ill and absent from the company, Piper directed one of the other junior engineers to modify the E-2 in an attempt to make it more attractive and more marketable.  This led to a rift between Piper and Taylor resulting in Piper buying out Taylor who then left the company.

The E-2 then became the J-2 and with further improvements, eventually the airplane became known worldwide as the Piper J-3 Cub.  Originally powered by a Continental A-40 engine, other larger Continental engines soon replaced the smaller engine.  The most common engine application in the airplane is the Continental A-65 engine of 65 horsepower.

In all, Piper built almost 20,000 Cubs between 1938 and 1947. As a result of a popularity of the aircraft, it is no wonder with such a high market share, most Americans believed all airplanes were Piper Cubs.

The Cub turned out to be the perfect training aircraft.  The airplane was economical to operate, easy to fly, and easy to maintain.  Spare parts were plentiful and the A-65 engine was the most common light airplane engine of the era.

In flight, the airplane could fly at a top speed of almost 85 mph.  With a cruise RPM setting of 2100, Piper J-3s had a cruise airspeed of 75 mph with a fuel flow of less than 4.5 gallons per hour.  While the airplane was not going to go anywhere fast, it had other traits which made up for its lack of speed. 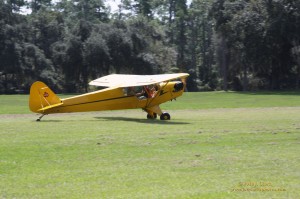 We don' nee' no stinkin' rhoonway

With a gross weight of 1220 pounds, the stall speed was less than 40 mph.  This gave the airplane a very short takeoff and landing distance.  Additionally, the airplane was incredibly forgiving; power-off and power-on stalls were very straightforward and the design of the airplane lends itself to very good stability.

The best thing about flying Piper Cubs is being able to fly with the left window slid completely open and the right window snapped in place underneath the wing with the door of the aircraft wide open.

One can truly enjoy flying in such a perfect flying machine.

1 Response to The Perfect Flying Machine