Roar of a Tiger

Things you learn from researching a book. You get an idea, you act on it, and you learn so much.

I decided to write about one of my favorite airplanes, the P-51 Mustang. Dropping the term “MOH P-51” into Google, I discovered only one pilot flying P-51s received the Medal of Honor. That was Colonel James H. Howard. CBS Newsman Andy Rooney, writing for Stars and Stripes at the time, described Howard as “the greatest fighter pilot story of World War II.” 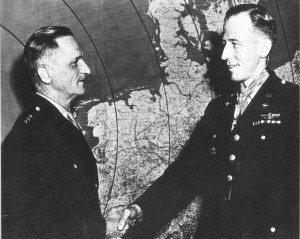 So, how does a fighter pilot achieve the Medal of Honor?

Howard’s journey began oddly. Before the Japanese attacked Pearl Harbor, he was a Navy pilot stationed aboard the USS Enterprise. In July of 1941, he resigned his commission to join the American Volunteer Group in Burma. As part of the AVG, also known as the Flying Tigers, Howard shot down six Japanese aircraft during the 56 combat missions he flew before the unit disbanded on July 4, 1942.

After returning to the United States, the Army Air Corps commissioned him as a captain, quickly promoted him to major, and then gave him command of the 356th Fighter Squadron, a component of the 354th Fighter Group of the 8th Air Force.

Flying from their base at RAF Boxted, the unit began operations with P-47s and P-38s. Then high command switched them to the P-51 Mustang. The Mustang, unlike the P-47 Thunderbolt and P-38 Lightning previously assigned to the unit, had the range to escort the bombers all the way into Germany. This was precisely what Howard was doing on January 11, 1944 when he led his squadron into Germany to provide escort services to the heavy bombers.

When the fighters rendezvoused with the bombers near Oschlersleben, Germany, they found the heavies pressed and outnumbered by a superior force of German fighters. In the following melee, Howard became separated from his squadron mates in the fight. After taking his first engagement, he worked at regrouping his unit.

Unfortunately, this was not to be. Returning to the fight, Howard found a force of about 30 German fighters attacking the bombers. Alone, he could choose to wait and regroup with his men, or … he did not hesitate. He took on the enemy fighters single-handedly.

Howard displayed the courage and tenacity typical of warriors since the beginning of this nation. When he saw the bombers taking heavy hits from the German fighters, he dove into the fray. In the following half-hour of intense air-to-air fighting, Howard took out three more enemy fighters.

Then the unthinkable happened. Three of his six .50-calibre guns failed, and then he ran out of ammunition. Undaunted, he continued to dive into the fight chasing the Germans away from the bombers. The Germans did not know he was “Winchester” and they could not take the chance of his guns bearing down on them. So they ran.

After the war, Howard re-entered civilian life working in airport administration at the St. Louis Airport, at Lambert Field. He remained active in the Air Force reserves, rising to the rank of brigadier general. Later, he moved to St. Petersburg, FL where he continued his activities in aviation.

In 1991, Howard penned his autobiography, Roar of the Tiger. His book dealt with his times in the war. On the 50th anniversary of the Oschlersleben combat on January 11, 1994, the county commissioners of Pinellas County, FL, presented him a plaque and placed a permanent exhibit commemorating the event and General Howard’s bravery.

General James H. Howard quietly passed at the VA hospital in March 1995 at the age of 81, after a life lived well.

To the vets, past, current active duty, and future.