Eighty-six years ago today, the first aircraft carrier to bear the name Lexington was commissioned. The USS Lexington was the first of her kind and consequently she became the lead ship of her type, the Lexington-class. Of the class, there was only one other ship to follow, the USS Saratoga.

Unlike the carriers of today, Lexington was converted from another design. On the drawing boards, she was originally going to be a battlecruiser, but because of the Washington Naval Treaty of 1922, naval officials decided to convert the battlecruiser into one of the nation’s first aircraft carriers. 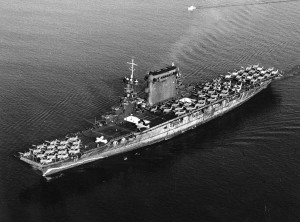 The first aircraft carrier to bear the name, Lexington.

During the ship’s early career, the Navy used her and her sister ship, the Saratoga, to develop tactics for these new types of ships. Ironically, some of the exercises included simulated sneak attacks on Pearl Harbor.

During the Japanese attack that came on December 7, 1941, Lexington was in the process of cruising to Midway Island to deliver fighter aircraft to the island. Officials canceled her orders and she returned to Pearl. Her first engagement of the war followed a few days later when the Navy ordered her to the Marshall Islands, which were lost to the Japanese before Lexington could get there.

Lexington sailed the Pacific becoming involved the invasion of Port Moresby and the Battle of the Coral Sea. It was in this battle, the Coral Sea, where Japanese aircraft severely damaged Lexington. As her crew valiantly fought on, vapors from tanks holding aviation fuel for the ship’s aircraft, damaged in the fighting, caught fire.

Early in the afternoon of May 8, Lexington took a series of direct hits. Two were above decks and the other two were forward, just below the waterline. The fires were uncontrollable and American leadership did not want the carrier to fall into enemy hands. That evening, Captain Frederick Sherman gave the command to abandon the ship shortly after 1700 hours and almost an hour-and-a-half later, having made sure in his mind his crew was off the ship and he was the last one aboard, Sherman left the Lexington.

Moments later, commanders ordered the USS Phelps to sink the carrier. After the last of five torpedoes, first launched at 7:15 p.m. and the last at 7:52, Lexington succumbed bow first to the sea.

During the battle, more than 200 crewmen died, but another 2700 survived and were rescued.

The ship won two battle stars for service in World War II. Not long after the Navy announced the loss of the carrier, workers at the Quincy shipyard building a new Essex-class ship contacted Navy Secretary Frank Knox requesting the name of the ship they were currently building, the USS Cabot, be changed to the USS Lexington. Knox agreed.

On February 17, 1943, the USS Lexington, CV-16, was commissioned into service. This Lady Lex would serve throughout the war and almost into the 21st century as the training carrier at NAS Pensacola. 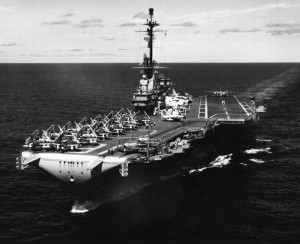