In 1930, aviation remained in the beginning stages of development. Pilots were few, airplanes fewer, and almost every aircraft was small with inadequate performance. Most airplanes were of the biplane design with some sleeker monoplanes starting to come off the design boards and manufacturing lines. However, as noted by a naval officer to Boeing engineer, C.L. Egtvedt (who later would become chairman of the aerospace giant), there was no “battleship” equivalent in airplanes. 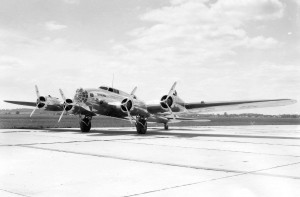 Four years later the military began planning for airplanes of a larger scale, specifically mission capable of aerial bombing after General William Mitchell proved the viability of the concept. On August 8, 1934, Army officials released a bid for “multi-engine” airplanes capable of bombing. Boeing was one of the first companies to jump into the fray. They immediately began designing the airplane and produced a prototype at their own expense. Their airplane was known as Boeing Model 299.

Model 299 came about from the design work of a team of engineers led by E. Gifford Emery and Edward Curtis Wells. The aircraft was capable of carrying 4800 pounds of bombs and sported five 7.62 mm machine guns. Four Pratt & Whitney R-1690 radial engines powered the aircraft allowing for a top speed of 236 mph and a range of more than 3000 miles.

The airplane was huge; with a wingspan of 103 feet 9 3/8 inches and an overall length of 68 feet 9 inches, the Model 299 had a gross weight of 32,432 pounds. Compared to other aircraft of the time, the Model 299 was the largest aircraft the world had ever seen. When Boeing rolled out the airplane and it was viewed by the public for the first time on July 28, 1935, a reporter for the Seattle Times, Richard Williams, stood transfixed by the sight of such a large aircraft with so many machine guns sticking out in different directions. He called the airplane a “Flying Fortress.” The name stuck and Boeing quickly recognized the benefits of the moniker and trademarked the phrase right away. It stuck on the airplane throughout the war and a production run of more than 12,731 units.

On that July day, Model 299 flew its first flight. Later, on a flight from the Boeing facilities in Seattle to Wright Field in Dayton, OH, the airplane set a non-stop speed record of 252 mph for the route.

Initially, flight testing went very well and there was great promise for the Model 299, but Boeing was to suffer a major setback on October 30. Major Ployer Peter Hill, the Army Air Corps test pilot for the Model 299 project, along with Boeing pilot Les Tower, was on the flight schedule for another evaluation flight of the airplane.

Unfortunately, the crew forgot to disengage the “gust locks,” a new method developed for protecting flight controls in high winds while the airplane was parked. After the pilots completed their pre-takeoff checks, the crew lined up and started their takeoff run. As the aircraft reached flying speed, the nose came up and the pitch attitude kept increasing. The pilots were unable to get the nose down and moments later, the big four-engined bomber stalled and crashed. 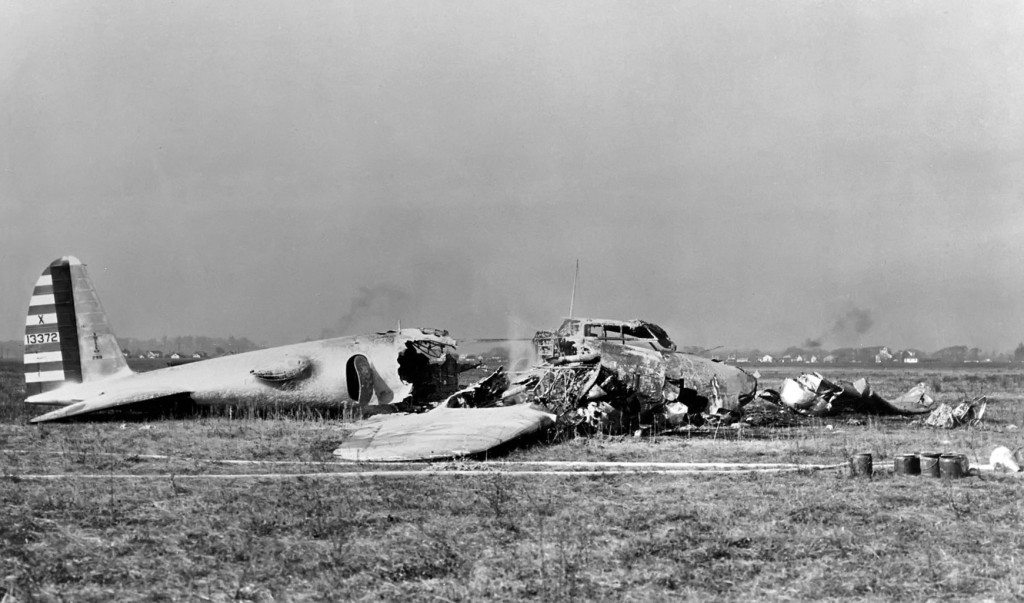 After the crash of the Model 299. Crash resulted from failure to remove the gust locks prior to takeoff. (Wikipedia, double-click for larger image.)

While other observers on the flight survived the accidents with severe injuries, both Hill and Tower died in the crash. While they lost their lives, it is worth noting they did not die in vain. From this accident, something new was created from the ashes of the destroyed Model 299 – the birth and use of the first pilot’s checklists.

The crash of the Model 299 set Boeing back on the testing schedule and Army evaluation, but it did not dampen the enthusiasm the Air Corps had for Model 299. It did, however, bring other, less than desirable facets of the airplane to light, such as the price.

In the competition for the contract, the Douglas contender, the B-18, was priced at $58,200 per unit. The Model 299, which would later be designated the YB-17, was priced at almost $100,000 per aircraft. With the price difference and the loss of their one flying prototype, it seemed as if Boeing were no longer in the running for the contract. However, the Army’s extreme interest coupled with the demonstrated performance of the airplane from the first flights, would soon make the Flying Fortress one of the most successful combat planes ever built.

Through the war, the bomber evolved from the first true combat variant of the B-17E that went to war in the European Theater to the B-17G, that was in place when the war ended in 1945. After the war, thousands of airplanes were destroyed, with a few remaining in service. The Coast Guard picked 18 Forts after the war and kept them in service in a search and rescue role until the last flight in October 1959.

Amazingly, the B-17 continued to serve in the Brazilian Air Force until 1968.