Yesterday and the day before were busy days for BluewaterPress. As I finished the fall term at school, my mind naturally began thinking of the things I had to finish for the press.

Highest on the list was drafting a letter to Fox News. Their early morning show, Fox and Friends, has featured many former Pan American employees telling wonderful stories about their time with the fabled airline. As I watched and listened to their stories, I thought, I must get Jamie on the show to talk about his book, Pan American World Airways, Images of a Great Airline. Before I had a chance to write the letter, Fox News had already contacted us. Be sure to watch Jamie tomorrow morning at about 8:20 on your local Fox affiliate. 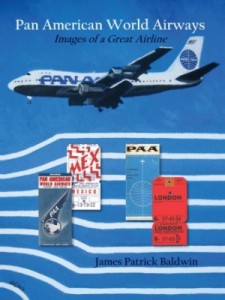 Jamie is a bona fide Pan Am aficionado. He has been collecting mementos of the airline for most of his life. After talking with one of our mutual students, Michael Coscia, he contacted me regarding the possibility of publishing his book about Pan Am.  We had published Michael’s book, Wings Over America, in 2009 and Jamie wondered if we could do the same with his collection of photos and short history of Pan Am.

My wife and I met Jamie outside a Cracker Barrel next to I-95 in North Florida. Sitting on rocking chairs in the warm Florida sunshine, I got my first look at his collection of memorabilia. It was very impressive and as we talked, his project became our challenge.

We had not worked with large formats or colors before and Jamie’s book would require nothing less. We began planning and researching and before long, his project began to take shape.

When we finished, we were all pleased with the look and feel of Pan American Airways, Images of a Great Airline. Through working with both Jamie and the book, I learned so much more about Juan Trippe’s airline that I never knew before. I gained a completely new respect for the pioneer aviators who made what Pan Am became during the heyday of the airline’s time.

Then came the sequel. Jamie teamed up with Jeff Kriendler who worked for Pan Am as vice-president, corporate communications. Together, the two authors captured the histories of 71 “Pan Amers” in their collaboration, Pan American World Airways, History Through the Words of Its People.

Their stories included accounts of flying the big Boeing 314 Clippers and the story Operation Pedro Pan, the story of the company’s extraction of more than 14,000 Cuban children before Castro slammed the door shut. Two of the more tragic stories of Pan Am included the collision of their Boeing 747 with one from KLM and of course, the bombing of Pan Am 103 over Lockerbie, Scotland.

The stories of these events were told firsthand by those who were not only there, but a part of the stories. From their words, one can learn a great deal about Pan American World Airways and aviation history in general.

While producing the two books was a monumental task, it was enjoyable and educational. From this work, I learned so much more about Juan Trippe, the airline, and the people who made it work.

I also gained a newfound respect and admiration for what was once the most important airline in the world.