The Thing About Flying

My friend, Holly, sent in this account of one of his latest adventures. He wrote it so well and supplied great photos, I had to have him debut as my first guest colmnist.

The thing about flying, the adventures just never stop. Monday, June 27th 2011, Robert and I flew his Piper back to Atlanta to view the pre-buy inspection on his intended Yak-52. We were off shore New Smyrna Beach after opening our IFR flight plan and climbing to assigned altitude. While we continued to climb along the Daytona Beach shoreline, something about 10 nautical miles to my right catches my eye. There was a very large dark object in the ocean. No, not one, but 32 large objects. It was a pod of whales traveling south. I wish we were just out mission-less, drilling holes in the sky with the time to investigate this sighting more closely. It was a very interesting sighting indeed.

The rest of our flight was rather mundane, other than the excitement in anticipation of the pre-buy. After landing at KPDK, we pulled up to Epps Aviation, our destination. We got to the maintenance hangar right away to meet the mechanic, Larry King. While observing and participating in King’s inspection of the Yak, we had a visitor. It was Mr. Pat Epps himself.

He came over to pay his respects to King. Larry is the performer who has opened the air show at Lakeland for the past eight years. Not sure if you know Epps pedigree, but he is a piece of aviation history, the youngest son of Ben T Epps, the first aviator in the state of Georgia. We enjoyed the meet. 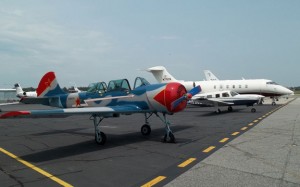 The pre-buy included replacement of ignition leads and the usual check out of all the systems. On completion of the pre buy, wire transfers, and so on over the following day, we determined we could successfully ferry the Yak home, rather than making other arrangements to get it back to Florida. We had the time and the weather seemed to be cooperating. Why not? Other than a few minor squawks, we were on our way that afternoon. The flight plan was now formed, filed, and put into play. Robert in his Piper, me in the Yak for a return flight of two, to Florida.

Robert removed his Garmin 496 from the Piper and offered it to me to use in the Yak. He did all the coordination with approach control and monitored me on 123.45. I just stuck to his 6 o’clock, 3/4 to a mile behind in trail.

With the 496, I had a good friend in the cockpit. Not only is it great for GPS navigation, it is awesome for the live Nexrad weather downloads. That 496 is on my radar for sure. We did have some weather enroute, but with the modern avionics in the Piper and the 496 in the Yak, we kept well away from the red indicators. His electronics make for a far safer flight environment on a long cross-country. 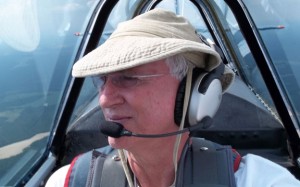 About half way to our destination, we made a fuel stop in Hazlehurst, KAZE. We were then on our way for the last 196 nautical mile leg of this adventure. Our direct flight path put us to the west of St. Augustine. We flew over your neighborhood. Perhaps you heard the drone of the radial engine. I thought I saw your car in the driveway. We also passed an awesome full rainbow to the east of your house. Photos to follow. As we navigated our way past Ponce Inlet, we turned for our final approach to Massy Ranch, X50. 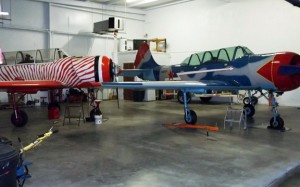 Good things were working for us. We were home before dark with a new Yak and landed with adequate fuel reserves. The Yak was letting me know it was time to land, 12 liters indicated both tanks. Reminded me of my Yak trip from St Thomas, between Providenciales in Turks and Caicos and Stella Maris, Long Island Bahamas. But that is another story.

Hanger E now rest with a new name, “The Yak Shack.” Come down for a visit with our new friend, 43R.