Instead, she proposed to sponsor the project if they could find a suitable girl with “the right image.” This led to the famous call from Captain Hilton H. Railey to Amelia Earhart. “Would you like to fly the Atlantic?”

Pilot Wilmer Stultz and copilot Louis Gordon, who would also serve as the mechanic for the flight, made room in the craft for Earhart. At first, Earhart was going to accompany the men merely as a passenger. Earhart took on the responsibility of maintaining the flight log. 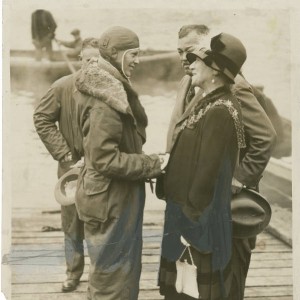 Friendship and her crew took off from Trepassey Harbor in Newfoundland on June 17, 1928.  Over the Atlantic Ocean, the flight operated for the most part in instrument conditions.  Because she had no training flying instruments, Earhart did not fly on this trip.  Twenty hours and 40 minutes after takeoff, Stultz landed the Fokker near Burry Port in Wales.

In England, when asked how much she flew, Earhart said, “Stultz did all the flying—had to.  I was just baggage, like a sack of potatoes.”

While she did not have the opportunity to fly across the Atlantic in 1928, everyone has to wonder about the burr it surely must have put under her saddle.  After her comment about being “like a sack of potatoes,” Earhart also said, “Maybe someday I’ll try it alone.”

When Earhart, Stultz, and Gordon returned to the United States, New York City treated the trio to a ticker-tape parade.  They were also guests of President Calvin Coolidge at a party in Washington at the White House.

Indeed, just under four years later on May 20, 1932, Earhart, then 34, did exactly what she said she might try.  In a single engine Lockheed Vega, she struck out for Paris.  After flying just shy of 15 hours by four minutes, she landed in a pasture north of Derry, Northern Ireland.

Earhart would win the Distinguished Flying Cross for this flight.