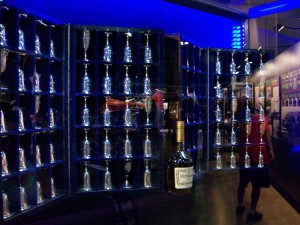 Few know the story of the Doolittle Goblets. In 1959, the city of Tucson, AZ gave a wonderful gift to the men who flew the first mission against the Japanese mainland on April 18, 1942. The gift? A set of 80 sterling silver goblets, with the names of each man engraved on a goblet, both right side up and upside down, so that each Raider’s name can be read, whether the goblet is placed correctly or upside down.

After the Raiders acquired the special gift from the Tucson citizens, they decided to keep the goblets at the Air Force Academy. In 1973, Lt. Col. Dick Cole, Doolittle’s co-pilot on the raid, decided the goblets needed to go to the annual reunions of the raid. He constructed a special portable case for the goblets, and the cognac. The goblets have since been relocated to the Air Force Museum at Wright-Patterson AFB in Ohio.

Each year when the surviving Raiders met, they held a private meeting, a “Goblet Ceremony.” They would remember those who were lost on the raid and since the raid, and those who were lost since their last meeting. After toasting those who had gone, they solemnly inverted each of the goblets bearing the recently deceased man’s name.

It is a very somber event, one taken very seriously.

After all, this narrative is about more than just a raid against the Japanese. It is more than the description of the big land-based bombers the Army flew from the deck of a Navy aircraft carrier. All of that pales in comparison to what is important. As with all stories that come out of a war, the incredible aspect of this story are the people.

They were the men who loved their wives, loved their children. They were the ones who loved, and were loved. They wanted to go to school to study and learn, play or watch football in the fall and play a pickup game of baseball in the spring. They were saving for their favorite car. They had a lot of living ahead of them, but they placed all that on hold to carry out one important mission. And they risked it all.

They agreed, with Jimmy Doolittle a long time ago, that the last two surviving Raiders would be the ones to crack the now 115-year-old bottle, pour the golden liquid, and then make one final toast to the 78 who preceded them.

4 Responses to The Doolittle Goblets