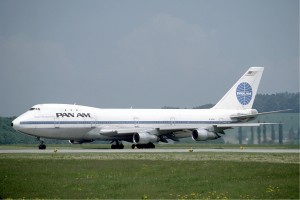 Today in 1927, Key West birthed Pan American World Airways out of a small maintenance hangar near Duval Street in Key West. Kelly McGillis, the actress who co-starred with Tom Cruise in Top Gun, presently owns the building purportedly to be the first offices of the airline. She runs one of the most fun restaurants on the island out of the location. There is contention among the locals as to the veracity of the restaurant housing the airline some 90 years ago.

Pan American World Airways won a contract to run the mail from Key West to Havana, Cuba. In fact, the government was happy to approve the deal. There was only one airline operating in South America and that was the German-owned Columbian airline, SCADTA. From this auspicious start, one of the most important airlines in the world began flight operations that would eventually allow the company to establish a route structure literally circling the world.

There is perhaps, no other airline with the prestige and history of Pan Am. Pan American Airways, as the world would later come know the airline, was the unofficial flagship airlines of the United States. From the small start in Key West flying single-engine Fokker monoplanes, the company would eventually grown into a behemoth, operating the four-engined Boeing 747, one of the largest airlines to haul passengers and freight around the world.

From the start with the single-engine Fokkers of the 1920s, the airline went on to larger and better aircraft. Everyone worldwide knew Pan Am for of course, their Clipper flying boats. It was during this time, the late 1930s and leading into the war years, that Pan Am fully established itself as the premier airline of the world. When the war broke out, as with all the heavy operators, the Clipper boats contributed much to the war effort.

There is evidence of a conversation, taking place between Juan Trippe and the president of Boeing, William Allen. Supposedly, Trippe told Allen that if he built the large airplane, Pan Am would buy and fly it. Ostensibly, the two men finalized the deal with a handshake and Pan Am took delivery of the first Boeing 747 to carry passengers. It was the second off the assembly line, Boeing retaining the first one for flight evaluation and testing. The company, long since in the habit of naming its aircraft as “Clippers,” named the first 747 The Clipper Juan T. Trippe, in tribute to the founder and leader of the company.

As the unofficial flagship airline of the country, it surprised no one when, in the late 1960s, Stanley Kubric featured Pan Am as the company leading the way into space travel in his movie, 2001, A Space Odyssey. It made perfect sense and everyone who knew anything about the airlines realized that when the time came and we traveled space as easily as the high seas and skies, Pan American Airways would naturally become Pan American Spaceways.

Unfortunately, fantasy was not to become reality. Pan Am declared bankruptcy on January 8, 1991 and ceased all operations 11 months later. The line, still considered the unofficial flag of the United States, was a target for terrorists. Twenty passengers lost their lives with the hijacking of Pan Am 73 in 1986. Two years later on December 21, 1988, 270 lost their lives with the bombing of Pan Am 103 over Lockerbie, Scotland. To this, there was also the additional loss of lives in the worst aviation accident in history at Tenerife on March 27, 1977.

The airline soldiered on, but, as with many organizations facing grave adversity in modern times, they succumbed to their losses. Almost to a person, the loyal employees would have done anything to save their Clipper fleet.

1 Response to Happy Birthday, Pan Am