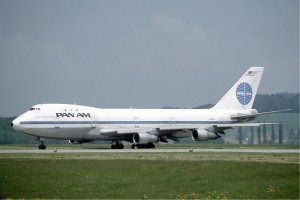 These days, if you don’t know who Juan T. Trippe is, the old airplane guys can almost excuse you because we have now moved so far down the timeline away from the glorious days of airline travel. This was a time when Pan American World Airways ruled the skies. For those who don’t know of Mr. Trippe, he is the man who created the airline.

Juan Trippe was born just before the turn of the century. While a student at Yale, the United States entered World War I. Trippe took a leave of absence to pursue flight training and a commission in the United States Navy. The war ended before he had an opportunity to fly combat, so when released from active duty, he returned to Yale to graduate in 1921.

After becoming bored with Wall Street, Trippe created the Long Island Airways which served as an air-taxi operation for New York’s rich.  He then worked with an airline known as Colonial Air Transport, which essentially ran airmail in the mid 1920s. After that, he became interested in starting service into the Caribbean, so he created the Aviation Company of the Americas.  This is the company, with headquarters in Florida, which would later become Pan American Airways.

Trippe, along with Howard Hughes, Eddie Rickenbacker, and others who many considered the leaders in the new airline industry, made air travel what it is today. Pan American Airways started business with service between Key West, FL and Havana, Cuba. From there, expansion became rapid.

Trippe was instrumental in expanding Pan American into the Pacific Ocean where the company flew their trademark Clipper flying boats. Additionally, Tripp became responsible for many of the innovations used in the airline industry of the time.

In the early 1960s, Pan American led the way into the jet age by ordering Boeing 707s. Through his friendship with Boeing’s Bill Allen, Trippe was principally responsible for the creation of the Boeing 747. In the latter part of the decade and into the 1970s, travelers the world over recognized the 747 as the symbol for international jet travel.

Trippe won The Tony Jannus Award in 1965 for his extraordinary work and contributions to the airline industry. He maintained the helm of Pan American World Airways until 1968.

The first Boeing 747 ever built never served as an airliner; it served as a test bed for all the evaluation the engineers wanted to do on the new airframe. Pan American World Airways purchased the second Boeing 747 off the assembly line. The company named the airplane The Juan T. Trippe in honor of the man who started it all and this airplane was the very first 747 to ever carry passengers.  This particular 747 should have won a well deserved place in aviation history. Today, The Juan T. Trippe should be the main display in a premier aviation museum. Sadly, she is not.

Unfortunately, as with many old airliners, The Juan T. Trippe went to the desert to sit outside in dry storage in Mojave, CA.  From there, buyers purchased the airplane for $1,000,000 and had it disassembled. For another $100,000, they had the pieces and parts of the airplane shipped to South Korea where they converted it into a restaurant.

The unnamed couple did have a sense of aviation history, which led to the original purchase. This unusual aviation slant was to be the draw for their restaurant. Unfortunately, their plan did not work. The restaurant failed and the airplane sat abandoned.

Knowing the aircraft’s significance in history, the couple worked diligently to find a buyer for the historic craft.  This, too, ended in failure.

This past week, The Juan T. Trippe met her final end.

For further reading, please see the L.A. Times coverage of the event at http://www.latimes.com/news/nationworld/world/la-fg-korea-plane-demolition-20101213,0,7513661.story.  The Times also ran an earlier account of where the airplane came to rest, which you can find at http://www.latimes.com/news/nationworld/world/la-fg-korea-plane-20101207,0,7455087.story.

4 Responses to The Juan T. Trippe