There’s nothing worse than walking around the neighborhood yelling, “Gracie! Gracie!”

Got out again. Most of the time she escapes, we get her right away. It is a stupid game she plays—she gets out, runs into the yard, starts eating grass, and then turns around to make sure we are chasing her. Then she runs away when we get close, but she only runs about ten yards and stops. At that point, she stops, turns around to look, just to make sure we are still chasing her and playing the game.

Only once before has something caused her to “go off the reservation” and she disappeared for just a little while. But she came back shortly after taking off. We were exasperated with her, having no idea of where she may have gone off. So we waited. We were in the office and the window of the office faces the back porch and the sliding glass doors into the kitchen. All of a sudden, we heard a strange sound. We looked out the office window and saw Gracie trying to knock on the back door. Having caught her claws in the screen, she was becoming indignant.

This time, she really did it. Ardis was off babysitting grandchildren, so it was just the cat and me. The cat, the great hunter. The great hunter that I found antagonizing a lizard in the living room that was dim-witted to the point of somehow entering a house with a cat. So then, I had to save the lizard.

While I was placing the lizard in the bushes outside, I think Gracie took the moment to slip past. I never noticed her departure. I went back in, went straight to bed, and fell asleep. I never realized the nitwit cat, the indoor cat who possess not a bit of street smarts, shrewdness, or knowledge of the real world beyond her food dish or water bowl—was now loose on the outside. I did not realize she was gone until I was getting ready to leave for work the next morning.

I delayed my departure for work as long as I dared while looking for la idiota but then I had to go. As I worked through the day, I worried about whether she was going to be okay, run over by a truck, eaten by an alligator, mauled by dogs, or killed in a plane crash. (It could happen, she could be standing in a field when a pilot had to make an emergency landing and plopped it right onto her head, killing her dead.)

Coming home from work that evening, Gracie did not greet me, as is her usual custom. That was a sad feeling. The house truly felt empty with Ardis still away and the cat not around.

I picked up the mail, went inside and stowed my stuff, and then came out looking for the cat. Of course, I walked around the neighborhood a bit, yelling, “Gracie!” to no avail. So I went back to the house and tried to get a little work done.

It was hard; my mind was not fully with it. I was sitting in the living room with my laptop on my lap (where else would it be?) trying to write. The writing was hard.

I started to surf. I thought of putting a GPS tracking device on the cat so I Googled that up. This is what I found. Check out this webpage: http://digital-lifestyles.info/2008/10/08/cat-gps-tracking/. It seems this guy in Britain put a GPS tracker on his cat thinking he would map where the cat goes while away. He was surprised to find the cat routinely traveled about half a mile away on its excursions, even crossing dangerous highways. Obviously, cats are stupid on both sides of the pond.

Suddenly, I heard a “meow” at the screen door. There she was with a look that said, “Hey! Human manservant! Why aren’t you letting me in?” Which I did.

She looked at me and then went right to her food dish. Then her water bowl. Then her litter box. “What? You had the whole world in which to dig a hole to poop while you were gone. You had to save it to bring it back here?” I was appalled! 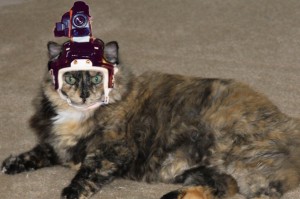 Gracie, not too pleased with her new equipment…

After Ardis came home from grandbabysitting duties, we talked about the event. She came up with a great idea. Not only could we put a GPS tracker on the cat, we could also get her a little helmet-cam. “That way, we might have an idea of where to start looking for her the next time she escapes,” said Ardis.

I thought of that. Ardis comes up with some great ideas. Like never naming a cat Stella.

Could you imagine walking through your neighborhood and passionately calling out, “Stella! … Stella! …  Stel…la!”?