Those were the last words of Captain Robert Loft, 38 years ago tonight. Eastern Airlines Flight 401 departed New York’s JFK airport at 9:20 in the evening enroute to Miami International Airport. The flight progressed normally until about 11:30. On the approach to Runway 9L for landing at Miami, First Officer Albert Stockstill, the pilot flying, lowered the landing gear to discover an unsafe indication on the nose wheel.

Loft, handling the radios on this leg, told the tower they would need to abort the landing and sort things out. ATC gave the crew clearance to climb to 2000 feet and set them on a westerly heading out over the dark Everglades. Loft directed Stockstill to engage the autopilot and then the two pilots, with help from an Eastern technician on board at the time, began disassembling the light assembly. The captain sent his second officer down into the “hell hole” below so he could visually check the position of the nose gear. 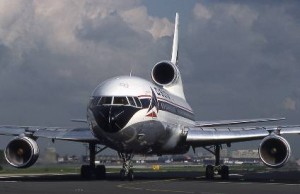 In the process of working on the light bulb issue, members of the National Transportation Safety Board (NTSB) assume Loft, in turning in his seat, nudged against the control column. This inadvertently disengaged the autopilot.

With the airplane trimmed out well, the big Lockheed Tristar began losing altitude very slightly and so smoothly no one on the flight deck realized the airplane was sinking so ever slightly into the darkness of the Everglades.

The cockpit voice recorder (CVR), records Stockstill saying, “We did something to the altitude.”

A moment later, Loft utters his famous last words, “Hey – what’s happening here?” At almost the same time, the left wing impacts the swamp, then the landing gear, and shortly afterward, the rest of the airplane.

Impact happened at only three knots less than 200 KTAS. Many credit the water and sawgrass, combined with the aircraft being somewhat under control at touchdown, as the reasons why 77 initially survived the crash. Two would later die from their injuries, bringing the total death toll to 101.

Many of the survivors owe their lives to the selfless acts of courage of Robert Marquis, known as “Bud” to his friends. Bud and his friend, Ray Dickinsin were in the ’Glades gigging frogs from his airboat. They witnessed the crash, and in the men’s minds, neither questioned what they had to do. Throughout the rest of the night and into the next day, even though they suffered burns from the fires of the spilled jet fuel, they repeatedly returned to the crash site to find and shuttle survivors out.

Bud Marquis won humanitarian awards for his courage that night 38 years ago tonight.