My student and I finished our flight a little early and when we returned to the ramp, I saw an early model Cessna 210 sitting in front of the flight dispatch building. From afar, the airplane looked good. As I approached it, it looked even better.

The interior was in good shape. I could see no corrosion on the airframe, and the avionics were up to date. As I was admiring the airplane, an older gentleman approached.

He was obviously the pilot of the 210. “Want to take a closer look?” he asked as he opened the pilot’s door.

“Sure,” he said as he placed his briefcase on the right seat. Then we began talking about old Cessnas. It was obvious he was a pilot’s pilot and had been around Cessnas quite a bit. We talked of the merits of the 210 and other Cessnas. Finally, I said I had to go meet my next student and he said he had to get on with his flight.

I enjoyed my short little discussion with the 210 pilot. As he climbed into the airplane, I walked into dispatch and met my friend, Rich.

“Do you know who you’re just talking to?” Rich asked.

“I don’t know – some old 210 pilot who really knew a lot about the airplane.” 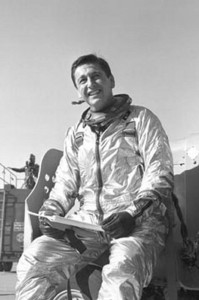 “That was Scott Crossfield.”

I jerked my head around to see the 210 taxiing away from our ramp.  Wow, a true American hero, I thought.

While I was talking to him, he came across as simply another Cessna pilot. During our discussion, I had the fleeting thought I would enjoy sitting down and picking this man’s brain a little more deeply regarding his knowledge about Cessnas. I knew he would be one of those pilots who would fit in nicely with our little group of aviators at the home field.

Crossfield was born October 2, 1921 and grew up in California and Washington. He enlisted in the Navy and fought in World War II as a Navy fighter pilot. After the war, he went on to acquire both his baccalaureate and master’s degrees in aeronautical engineering. Then he began his work as a test pilot at Edwards Air Force Base in California. 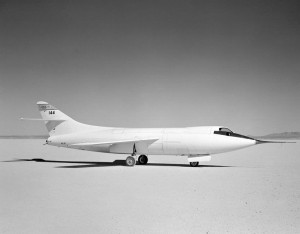 On November 20, 1953 while working for the National Advisory Committee for Aeronautics’ (NACA), Crossfield became the fastest human alive when he piloted the Douglas D-558-II Skyrocket at twice the speed of sound. Later, after joining North American Aviation, Crossfield became instrumental in the design of the X-15.

Crossfield would go on to become a division vice president of Eastern Airlines, then a senior vice president at Hawker Siddeley, and finally he served the U.S. House of Representatives on their Committee for Science and Technology.

On that day in the late 1990s when I met him on the ramp, I think Crossfield was content with being merely Scott, just another Cessna pilot.