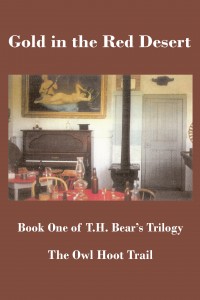 Sometimes life can surprise you.  Such is the case with my friendship with one T.H. Bear and his lovely wife, The Bear Lady.

I have known The Bear and his wife for over 20 years now.  They have both worked in law enforcement and they are also pilots.  Throughout our years of friendship, I heard the Bear talk about the books he was writing, but he would always say, “Aw, I only write mainly for myself.”

Well, for whatever reason, he decided he should write for others.  I am glad he did and I am happy to be involved in his creative efforts.

The Bear’s mind is an amazing thing.  He has all kinds of trivia trapped within his cranium including, most importantly, history.  Combined with his fertile imagination, he has created one of the best stories I have ever read.

The story The Bear has written is broken into a trilogy.  The series titled, The Owl Hoot Trail, includes three books.  Book one is Gold in the Red Desert, the title of the second book is The Withlacoochee Renegades, and the third volume is The Turning of the Earth.

All three books tell the story of one Clifford “Reb” Brown.  Having grown up in Southern Georgia before the war, Reb finds himself caught up in the events of the War Between the States.  The Bear has done an incredible job of weaving his fictional characters into the actual facts of history.  He laces his stories into the world events of the time and illustrates how the actions which take place half a world away influence the outcome of the characters of his novel.

The first book, tells the story of how Reb finds himself fighting against the Union and becoming captured.  He spends time as a prisoner of war at Point Lookout in Maryland.  The war finally ends and Cliff Brown begins his long trek home to Georgia barefooted and malnourished, as so many recently released prisoners.  At home, he finds The Reconstruction of the South unbearable.  In short order, the authorities accuse him of a crime he did not commit.  This puts Reb on the owl hoot trail heading for the territory of Wyoming.

While in Wyoming Reb makes great friends as well as enemies even as he lives from one adventure to the next.  The Bear vividly weaves details of the Wyoming Territory with historical accounts of the Pony Express, the gold rush, and governmental history of the time.  Toward the end of book one, Reb receives a telegram from his mother requesting him to come home. 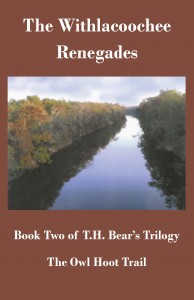 Book two opens with Cliff and his new bride making their way back to Georgia.  Cliff comes home to find the situation grimmer than the short message of his mother’s telegram.  This leads to more adventure for Cliff as he tries to make right the things that are wrong in the land of his home.

I have read book two and I am in the process of finishing book one. I simply cannot tell you where book three leads.  I have not read that one yet, but as with everyone who has read The Bear’s first books, I too, eagerly await the stories of Cliff’s further adventures.  One of our mutual aviator friends who read The Bear’s first book, gave The Bear $50 to get the very first copy of book two.

Seriously, these books are that good.  Once you start reading, it is hard to put the story down until you are finished.  The Bear’s writing style keeps the reader fully engaged and wondering what will happen next.  Both books are available through our website, follow the hyperlink above.  Book three to follow soon.

I do not exaggerate when I say The Bear could be the next Louis L’Amour.

9 Responses to The Owl Hoot Trail