The Jenny and the Barnstormers 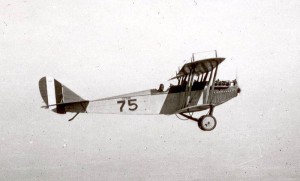 One of my favorite airplanes is the Curtiss JN-4D “Jenny.”  Benjamin Thomas, an Englishman working for Thomas Sopwith of Sopwith aeroplane fame, designed the Jenny and the airplane went into production in 1915.  It became the most important Army training aircraft of World War I.  More importantly, the Jenny was the airplane that gave aviation a beginning in America.

From the JN-4A to the JN-4HG, Curtiss built and delivered more than 5800 of the training biplanes.  The military used the airplane primarily as a training aircraft for beginning pilots.

Powered by a Curtiss OX-5 engine of 90 horsepower, the Jenny had a top speed of 75 mph. Reportedly, the Jennies had a service ceiling of 6500 feet.

Many regard the airplane as one of the best-known airplanes of all time.  The reason for this is simple to understand; the Jenny was the first truly successful trainer used in North America.  Thousands of pilots from an entire generation learned to fly in Jennies.

After training, they went to war flying Sopwith Camels, Spads, Nieuports, and S.E.-5s. Fighting in the air proved to be a hard, dangerous, and sometimes fatal business.  Survival was questionable but many pilots did survive the war and when they came home, they discovered their desire to continue flying.

Unfortunately, the aviation business offered little in the way of employment, so the flying veterans created a new industry.  When they came home, the Roaring 20s were about to start.

And so was the era of the barnstormer.

The government sold many of the post-war surplus Jennies to civilians after the war. These airplanes introduced countless Americans to the joys of flying.  Many aviation acts of the time, such as the 13 Black Cats, flew Jennies.

In the beginning, many of the barnstormers worked alone, or in groups of two or three. There were also those who grouped together in what many called “Flying Circuses.”

Many of the barnstormers created their own tricks, and many became specialists with their own tricks.  The barnstormers focused on wing walking, playing tennis on the top wing of a Jenny, transferring from ore airplane to another … without parachutes.  They were truly an amazing group of people.  America will probably never see another time like that of the Barnstormers and the Jennies.

Here’s hoping we never forget the airplane, those who flew her, and the women and men who we called barnstormers.

1 Response to The Jenny and the Barnstormers