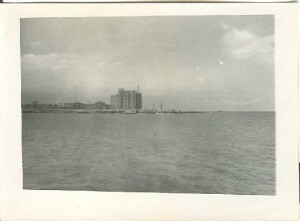 One afternoon, one of my friends and I speak of Cuba, Castro, and what might come with Castro’s passing.  I comment that I cannot wait for Cuba to open, so I can visit the island nation again.  He is of the opinion we should be able to go there now.  “I don’t know that Castro is such a bad person,” he says.

I am stunned!  Then I realize my friend probably has little knowledge of Cuba.  Nor has he read Armando Valladares’ book, Against All Hope: A Memoir of Life in Castro’s Gulag.  He also does not realize I am half-Cuban.  I don’t know if he has ever been to Cuba, but I don’t believe so.

In his May 2, 2007 editorial carried by ABC Radio, Fred Thompson talked about Cuban healthcare and referenced Andy Garcia’s film, “The Lost City.”  He referred to it as the “brilliant fictionalized movie about the real Cuban experience.”  He also noted how Hollywood had given the movie “the silent treatment.”  Thompson went on to say Hollywood had a “complete lack of sympathy for fellow artists persecuted for opposing the Castro regime.  Pro-democracy activists are routinely threatened and imprisoned, but Castro remains a hero to many” in Hollywood.

I don’t know if Fred Thompson has ever been to Cuba, but it is obvious the man used his intellect to form reasoned opinions of the world around him.  As one who was actually in Cuba when Castro took over, I know the real story.  When Andy Garcia directed his film, he was dead on with his portrayal of a Cuban family making hard decisions to leave Cuba in the late 1950s.  When my wife and I watched the film for the first time, vivid memories of my life as a boy in Havana came flooding back into my mind.  The family story Garcia depicted in his movie was very close to my own family’s story.

My father’s parents lived in Havana, Cuba.  We were there when Castro took over during the “Revolución.”  Even as a child of only six, I remember how excited my father was when Batista was overthrown.  I also remember how we suddenly left the island a short time later.  I remember it all to this day.  What else do I remember?

I remember my grandmother’s music room.  She was a concert pianist for the Havana Symphony.  The floors in her studio were a rich black and white tile on which sat a grand piano; I remember the bookshelves from the floor to the ceiling filled with music books and sheet music.  In my mind’s eye, I still see the overly large windows letting in the warm Caribbean sunlight.  It was a very bright room.  I remember my grandfather’s medical clinic and the turkeys on his hobby turkey farm.  I remember being in downtown Havana with my mom and dad and his parents.  And I remember looking out over the ocean while standing with my father on the Malecón. 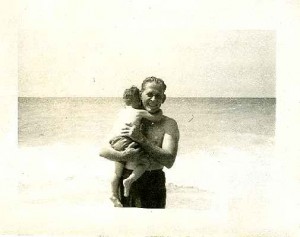 My grandfather, “Jose Frank,” holding me at the beach

Cuba was a wonderful place.  I will never forget the island; for me, it really was paradise.  I was, of course, too young to know anything about the casinos, the shows, the sex, or the politics.  What was important to me, and is still important, is family, even if time, family squabbles, and the ever-roaming ranges of my father’s libido hurt the family.

Today, of course, Cuba is a very different place.  When I stood on the Malecón with my father and grandfather in the late 1950s, Havana glistened in opulence.  The apartments and buildings along the northern shore were well kept.  Young people energized the city and gamblers from around the world maintained a high cash flow into the old city.  New cars cruised up and down the highway next to the Caribbean; they were all the latest models from Detroit.

Now, the buildings are crumbling, the young people are disheartened and border on being malnourished, the gamblers come from Europe, and the cars are the very same that cruised the Malecón in 1959.  Havana, as Andy Garcia has so aptly described, is truly The Lost City.

For everything Castro promised, Cuba and the Cuban people have suffered tremendously.

This entry was posted in Life in General, Personal and tagged Against All Hope: A Memoir of Life in Castro’s Gulag, Andy Garcia, Armando Vallaredez, Castro, Cuba, family stories, Fred Thompson, Havana, leaving Cuba, Malecón, Memories of Cuba, the Caribbean, “The Lost City”. Bookmark the permalink.

1 Response to Memories of Cuba