June. It is a fine time of the year. It is a time for Father’s Day and graduation. The fathers probably pretty well have it figured out. The graduates, on the other hand, may be still working on it. Congratulations, though, you’ve made it!

Graduates all across the country are now starting to deal with the problems of finding a job, starting their careers, paying taxes, and so on. They also have to start making their student loan payments, which, as always, are too high. Toward the end of their senior year, many start getting nervous about what they are going to do in order to repay, in some cases, massive amounts of debt. For some graduates, the commitment may seem insurmountable.

Another factor influencing perceptions of some graduates is the dismal job market. Combined with the pathetic buying power of the dollar, the future can look bleak.

However, it’s only bleak if you allow it to be bleak.

Many times, I have told both high school and college graduates to pay no attention to the news media when they are reporting on the problems of the economy. I have always said it is better to go out and make your own economy, rather than joining a bad one.

Then I introduce the students to the concept of starting their own business. Immediately, some of them will start rolling their eyes and start voicing all kinds of excuses as to why they cannot do that. The most popular excuse is, of course, “I don’t have the money to start up a business.” Next to that is, “I don’t have time to start a business.”

When students start talking about not having the time or money to start a business, I point out that they can start a business and they can be successful. You are not successful only if you allow yourself to fail. Oh, don’t get me wrong, you may fail a few times. But is it a failure if you take what you learned, apply it to a new company and finally become rich?

We live in a magical and marvelous time. Never in the history of humankind have there been more opportunities to make money. Oh yeah, and that is without working – at least too hard.

The hard part in this new age, is having the imagination to come up with the idea that will make you money. This part’s called “work.” Running the business after you determine what you want to do is the easy part. Coming up with your idea, well, that is somewhat hard.

When talking to graduates about starting their own business, this is the point at which some will become glassy eyed and walk off. Those who stay past this juncture, are about to get a great head start in their financial lives.

Students throughout the nation are carrying a substantial debt for their college educations. Over the past 10 years, student loan debt has increased four-fold. In 2003, the total was 240 billion and now it is more than $1 trillion. Moving further into the 21st century, this debt will increase substantially. Each year, 20 million students enroll in universities in the nation. In order to make ends meet, 12 million of those students must borrow money to cover their academic costs. This ends up as a substantial debt for many of those students.

One of the problems of a great debt is how it delays the start of a young person’s life. Many delay major purchases – houses, cars, and other large items until later in their lives. They also put off important life events, marriage, children, and more. This is not good for the young person, their family, or our nation.

So, the question becomes one of how to solve this debt problem…

As I mentioned, we live in a magical and marvelous time. As young people join the work force after graduation, they have tools no other generation before them had – namely, the Internet.

The neat thing about the Internet is that one is capable of selling anything 24 hours a day, seven days a week, 365 days a year. Let me put that into some perspective for you…

If you were to come up with a great idea and everyone liked what you had to offer and had to have one, maybe you could sell an average of seven of your widgets each hour. Hmmm… That’s seven widgets x 24 hours x 365 days a year equals 61,320 total widgets.

Did you come up with the same number I did? Was it perhaps $488,720? Could you maybe live on that? And pay off some student loans?

Now here is the real secret. You have to develop your business to run autonomously. In other words, you have to design a system that runs without your constant attention. The way to do this is to hire a third party vendor to take the orders, ship your product, and give you the money less their fees. At the end of the month, the total amount of your work would be to compare their statements against your bank account statements. 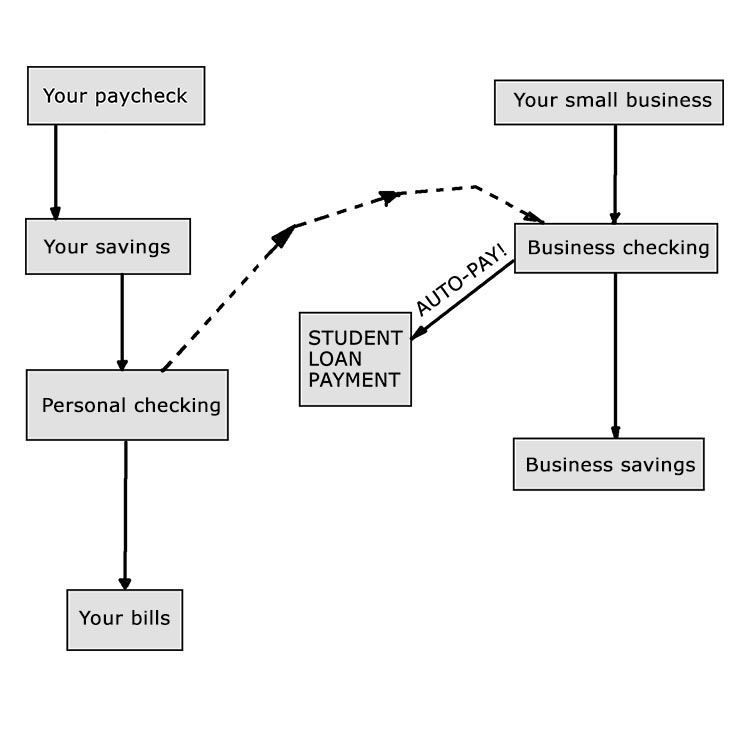 Now, here is the important thing about the flow chart above. The first person you should pay is yourself. Learn to live with less and always take 10 percent of your paycheck and let it start growing in savings.

From there, it can flow into personal checking and then off to pay all your bills. Well, maybe most of your bills. (And be careful with credit cards.)

Regarding your small Internet business, after the money comes in from the business, it will go into business checking. Set up an “auto-pay” rule so that your student loan payment is paid in full each month on time by the business account. In the beginning, you may have to supplement that payment with your personal checking account (see the dashed line). After a while, though, you should start making enough money from your small business to let it pay the student loan payments on its own – month after month after month.

When you can, if there is an excess, you can funnel the extra money into your business savings. One day, that business savings account might exceed the balance on your student loans. Do you just pay it off? Naw – let it ride. You are accomplishing a great payment record and building credit with on-time payments all at the same time.

After all, what does it matter? If you are successful at living on your paycheck and you let the business accounts build, you are far ahead of the game.

6 Responses to Got Student Loans?