One hundred fifty years ago this morning, the charge on Gettysburg commenced. Many times referred to as the turning point of the war, both armies suffered horrible casualties at the Battle of Gettysburg. Today, many have limited knowledge of what really happened on that battlefield and most do not realize that in this one battle, Americans on both sides suffered more casualties in three days of fighting than the total number killed in Vietnam.

The battle actually began with an accidental meeting between the two forces. According to noted Civil War historian, Shelby Foote, the Rebs had heard of a shipment of shoes soon to pass through Gettysburg, a small town of only 2400. The Southern troops were initially successful in driving back the Union defenders.

The Union army had a defensive line established along the north side of Gettysburg, which was threatened by General Robert E. Lee’s army. To the south of the community, another small contingent of Union troops stood watch. Further south, the names of other battlefields are found; Cemetery Ridge, Peach Orchard, Little Round Top, Big Round Top, Rose Woods, and the Devil’s Den. This would be where some of the fiercest battles between the two massive armies would take place.

On the first day of battle, the Union troops began faltering. To both the north and west of Gettysburg, Rebel forces trounced the Union soldiers driving them back into the town. General Oliver O. Howard ordered his men to retreat to the south. There they could take over the high ground at Cemetery Hill join their comrades staged near the ridge.

On the second day of the battle, General Evander Law amassed the Southern troops under his command on the high ground of Big Round Top. Later in the day, the 15th Alabama Infantry began their assault on the 20th Maine located on the southern range of Little Round Top. Colonel William C. Oates, who worked his command to the right trying to outflank the 20th Maine, led the 15th.

Bitter fighting followed over the next hour and a half. It appeared as though the 15th Alabama would be victorious in taking the high ground. They charged, the 20th Maine, led by Colonel Joshua L. Chamberlain, retreated. Then Company B of the 20th Maine regained composure and charged back. They also had riflemen at the ready who opened up on the Alabamians. In the end, the fighting turned to bayonets and hand-to-hand combat.

In the fighting that ensued, the soldiers were next to one another and mixed in with their enemy. According to reports of survivors years later, many soldiers did not know if the man next to him was friend or enemy. The 15th Alabama entered the fight with more than 400 men. Over half were lost that day.

Later, Colonel Oates would credit Colonel Chamberlain’s “skill and persistency and the great bravery of his men in saving Little Round Top and the Army of the Potomac from defeat.” He also believed that had another Confederate unit joined with the 15th Alabama to the far left of the Union Army, “…we would have completely turned the flank and have won Little Round Top, which would have forced Meade’s whole left wing to retire.”

For his actions that day in battle, the nation would award Colonel Chamberlain our highest decoration, the Medal of Honor.

I cannot imagine the fighting that took place those three days at Gettysburg. One of the companies engaged in the fighting with the 15 Alabama was Company G. One member of Co. G was 24-year-old Private John Alexander Woodham, my great-great-grandfather.

He and many of his cousins from the Dothan, AL area joined the 15th in August 1862. Like most young men in the South, he owned no slaves and his only interest in the war was to preserve his life of farming and protect his home from the invaders of the North.

He went on to survive the Battle of Little Round Top and fight on in other engagements. Union troops later captured him at the Battle of the Wilderness and placed him in the prison at Elmira, NY. Plagued by malnutrition, respiratory ills, dysentery, lack of water, and proper clothing, he fell gravely ill. 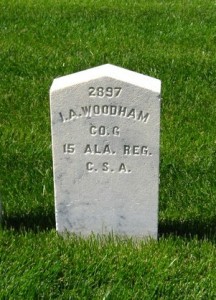 The grave of “I. A. Woodham” in Woodlawn Cemetery, Elmira, NY.

Additionally, other close relatives of John Alexander identify his involvement, unit, date of death, and interment at Woodlawn as matching the misidentified burial plot of I. A. Woodham. 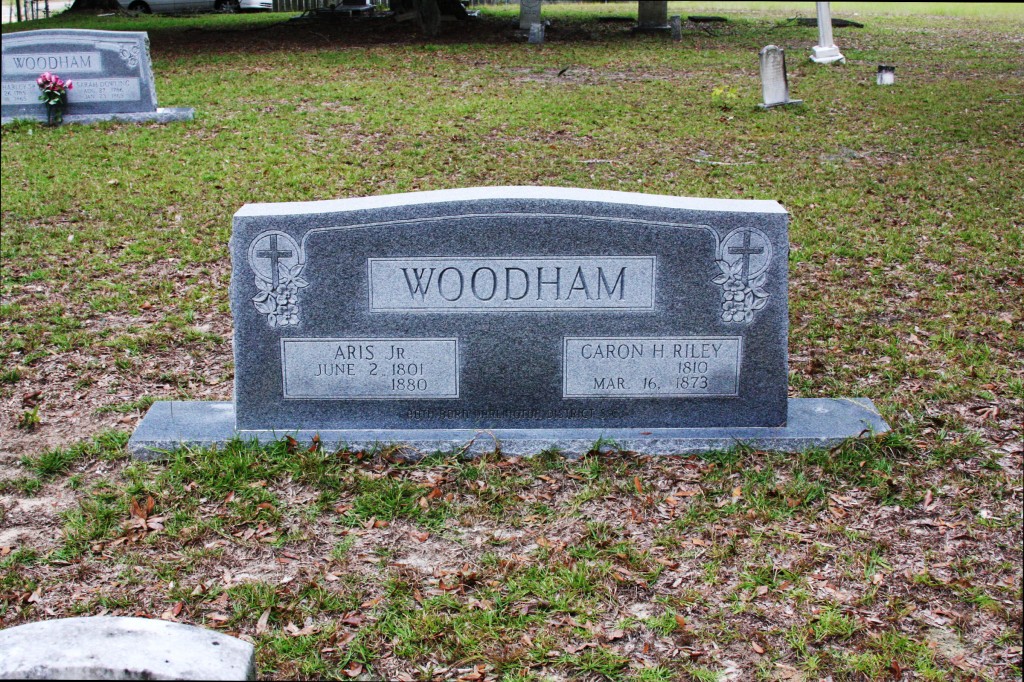