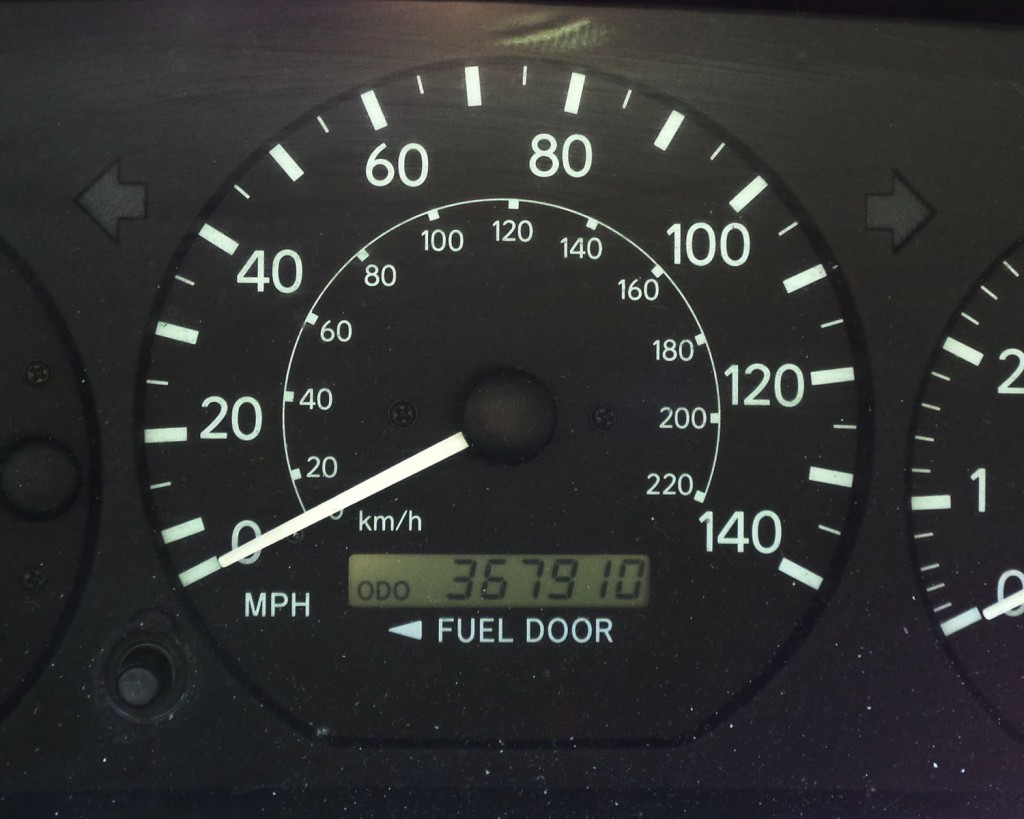 Well, it is over. After 367,910 miles, the Road Warrior swallowed her last little sip of gasoline, sucked in her last breaths through the air induction system, and rolled her last few feet into the Hyundai dealership in St. Augustine. This, after leaving me stranded on the side of Interstate 95.

I wanted to drive her out to at least half a million miles, but she just needed too much work. The cost just did not justify keeping her going. It would have been about $3000 to keep her going and I just would not be able to trust her not to let us down anymore. The last straw was the failure of the electrical system and battery. I am fairly sure the alternator was dying, putting out just enough juice to keep the alternator warning light off, but not enough to charge the already weak battery. I had to call home and get my wife to come out and we ended up jumping the car six times from the place where she died on the Interstate all the way to the dealership.

I feel bad about leaving her at the dealership. She was a good and faithful friend. I purchased this 2001 Camry in 2002 and she had 13,675 miles on her at the time. I and my wife and friends added another 354,235 miles. I did the lion’s share, so assuming I personally added 350,000 miles, divided by an average speed of 57 miles per hour, it means I sat in the driver’s seat of the Road Warrior for about 6140 hours. That is a lot of time.

There were good times, and bad. We had happy times in the car, as well as some very sad times. She took us to parties, movies, out to visit friends, weddings, the beach, school, work, and to funerals. She was everything we needed in a car.

I remember crossing the 100,000-mile mark and wondering if I should start thinking about another car. She said, “Naw, I’m okay, I’m just reaching my stride,” and kept right on going. She only let me down twice; both times due to broken timing belts. One time, it was my fault and the other hers, as I pushed her to the limit. The belt is rated for 90,000 miles and a little less than 90,000 miles on the second belt, I was driving home in a hard rain. There was standing water on the Interstate and I was letting the cruise control hold the speed. Suddenly, I hit a deep patch of water and the wheels hydroplaned, the engine surged, then the tires caught on the pavement again. When they did, the belt broke and it was time to call AAA.

The second time the belt broke, it was a little over 270,000 miles. I was going to the shop the following week to have the belt replaced, but it beat me to the punch. We were returning from Tampa passing through the middle of the Ocala National Forest, just after crossing the Cross Florida Canal on Highway 19, her tach needle and speedometer suddenly dropped to zeros. As we coasted down the backside of the tall bridge to a deadstick landing on the side of Highway 19, I cussed myself out for pushing it too far. Of course, there in the forest, there was no cell phone coverage.

The Road Warrior may have let me down a couple of times, but in the end, the events she presented us with renewed my faith in the goodness of humankind.

I started wondering about being in the forest after dark (it was only about 45 minutes from sunset). I thought about what evil might lurk out in the woods after sunset, animal, human, or otherwise, just beyond the light and in the darkness. As I thought about how to extricate myself from the situation, Ardis started praying. It always works.

About this time, a large pickup truck flying oversized Confederate Stars and Bars from both sides of the bed went by us. Then it slowed and turned around and I thought, I don’t have anything for a weapon if I need it. Silly me, the man and his wife and child pulled up behind us and offered to help. We talked about it, he had a chain, and the next thing I knew, he was pulling us to Palatka at 60 mph.

My friend and neighbor, Dan, helped me with the decision to keep driving the Road Warrior beyond the second timing belt incident. A professional mechanic, he told me to go buy a new belt and he would install it. Thanks, Dan.

This last time, she let me down hard. I was on my way to give a final exam, which I had printed out and sitting in the seat next to me. Then it happened.

Sitting on the side of the road, I called work and talked with one of the other professors. He offered to proctor the test for me, but the problem was that it was in the car with me. So I started thinking fast again and knew that I could send him a copy by email. I opened up the hotspot on my iPad, wirelessly connected the computer to it, composed the email, attached the test, and poof! Right there from the side of the highway from a dead car I was able to send him the test. Technology is “wunnerful!”

After Ardis came to my rescue and we jumped the car, it was time to head straight to Hyundai of St. Augustine. It took six more jumps, but I parked her one last time and went to talk to Roosevelt “Rosie” Ramsubhag. He came highly recommended and did a great job for us. I will never forget how he looked at me when I asked how much they would allow for the trade. 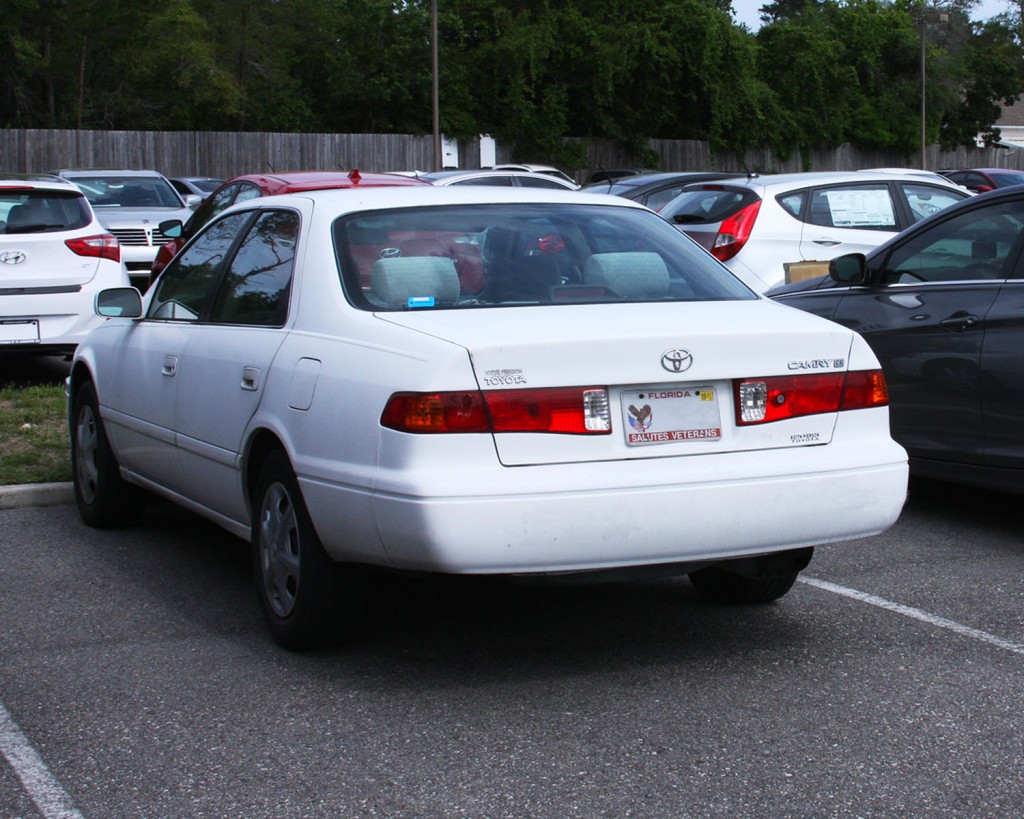 The Road Warrior parked for the very last time with 367,910 miles showing on her odometer.

“Well, I don’t want to insult your intelligence…” he started out. I had to laugh. I got every last cent of use out of the Road Warrior. According to my spreadsheet, in the end I had worked the final cost per mile down below 12 cents. She was a good, faithful, and loyal friend. I think the Sonata will do the same for us.

Hummm, only now we have car payments…

So begins the saga of the next Road Warrior.

Like Loading...
This entry was posted in Life in General, Personal and tagged 2001 Camry, 367910 miles, broken timing belts, died on the Interstate, half a million miles, the Road Warrior. Bookmark the permalink.