In the Orlando area, the aviation community is well aware of a gentleman by the name of Joe Kittinger. He has been well involved in the aviation industry almost all of his life. In fact, he has set some significant aviation records during his career. 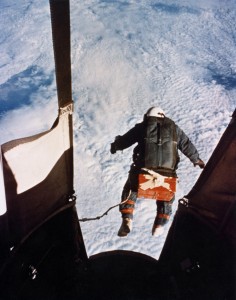 His most notable record occurred 51 years ago today. Kittinger jumped out of a balloon from an altitude of 102,800 feet, 18 miles above the year. That was one record. The next record was for becoming the fastest human alive without an aircraft in reaching the speed of 714 miles per hour during free fall. He also attained the record for the longest freefall with a drogue parachute.

Joe Kittinger truly is Florida’s hero. He was born in Tampa on July 27, 1928 and attended the Bolles School in Jacksonville. He is also a Gator, of the University of Florida in Gainesville. After graduating from aviation cadet training in March 1950 and commissioning as a second lieutenant, he would go on to complete training as a fighter pilot and fly F-84s and F-86s in Europe.

Following his duty overseas, the Air Force assigned Kittinger to Holloman AFB in New Mexico. While there, Kittinger became involved in aeromedical research regarding high altitude, high speed ejections. One of his first assignments was to fly a chase jet following a rocket sled in which Colonel John Paul Stapp was experimenting with high-speed acceleration and deceleration effects on humans. It was through his association with Colonel Stapp that Kittinger became involved in aeromedical research and space exploration.

During Kittinger’s work in the aeromedical field and high altitude parachuting, he set and still holds unofficial records for the jumps noted above. They are “unofficial” only because the Air Force never submitted the information to the Fédération Aéronautique Internationale (FAI).

Kittinger would later set more aviation records that would gain submission to the FAI. Many of the records Kittinger set are still in place. For his jumps in New Mexico, the Air Force awarded Kittinger the Distinguished Flying Cross and President Dwight D. Eisenhower presented him the Harmon Trophy.

Later in his Air Force career, Kittinger flew three combat tours in Vietnam. He participated in more than 480 missions between the first two tours flying the A-26 Invader, and his third tour, in which he flew the McDonnell-Douglas F-4D Phantom.

It was during his time while flying Phantoms toward the end of the war that a North Vietnamese pilot shot Kittinger down. The shootdown happened on May 11, 1972. He and his Weapons Systems Operator, 1LT William J. Reich, engaged a Mig-21 from a flight of several enemy fighters. During the dogfight, another Mig-21 gained the advantage over Kittinger and Reich.

As a lieutenant colonel, Kittinger became the senior ranking officer (SRO) of a group of other prisoners. In this capacity, he was responsible for maintaining military discipline among his fellow captives. He and Reich remained prisoners of war for 11 months. The North Vietnamese held them along with others, in the Hanoi Hilton. When the hostilities ended on March 28, 1973, Kittinger and Reich, with other Air Force, Marine Corps, and Navy pilots, flew to Clark AFB and freedom.

After leaving the Air Force in 1978, he returned to the Sunshine State to settle in Orlando. Still maintaining a strong interest in ballooning, Kittinger went on to set more aviation records, including a crossing of the Atlantic Ocean in 1984.

He worked for Rosie O’Grady’s Flying Circus for a time serving as the vice president of flight operations for the entertainment company. Kittinger also maintained his work in aviation as a consultant.

There is little question Colonel Kittinger was a great contributor to aviation. The work of Colonel Stapp and Colonel Kittinger provided immeasurable experience and information to the aeromedical field. Both the military and the civilian communities later used much of their work in space exploration and the further development of life support systems technology.