Another of the great writer-flyers from World War II was a Frenchman by the name of Antoine de Saint-Exupéry. Unlike the youthful Bert Stiles profiled yesterday, Saint-Exupéry was relatively older—especially for serving as a combat pilot.

Saint-Exupéry is the author of several classic books about aviation. Wind, Sand, and Stars, is one of his most important, as are Night Flight and Flight to Arras to name three. Then there is his classic, the book by which most remember him: The Little Prince.

Saint-Exupéry, as with many writers, failed in other jobs before finding his place as a wordsmith. He was not an exceptional student having studied architecture, and entered the military in 1921. It was in the military that he trained to become a pilot.

He began serious flying in 1926 working as an airmail pilot. Saint-Exupéry was a purist at heart, observing that the new generation of pilots really did not know how to fly as well as those who flew before. He continued to make pioneering flights in the fledgling industry and started working for different airline companies in various positions.

It was during this time, he started his writing career with the publication of the novella, L’Aviateur or The Aviator, which came out in the French magazine, Le Navire d’Argent. Publication of his first book, Night Flight, followed in 1931.

While he enjoyed success as a writer during this time, Saint-Exupéry also began developing in his aviation career. His work in flying the international mails was very important to the growth of the aviation industry.

At the end of December 1935, he and his navigator, André Prévot, were competing for a prize of 150,000 francs for the fastest flying time from Paris to Saigon. After surviving a crash into the Sahara Desert in Libya, they soon consumed their rations and suffered from dehydration because of the desert heat. Both men experienced hallucinations. A Bedouin nomad found the men in the desert and saved them. This experience served as much of the background for Saint-Exupéry’s children’s story, The Little Prince.

Publication of The Little Prince took place in 1943 at the same time Saint-Exupéry began flying for the Free French Forces. He was 43 at the time, older than most assigned to combat operations.

The following summer, Saint-Exupéry took off in the evening of July 31, 1944 flying an F-5B (a modified P-38 Lightning) reconnaissance aircraft. His tasking was to gather intelligence on German infantry positions near the Rhone Valley. He never returned. His fate remained unknown for 54 years. 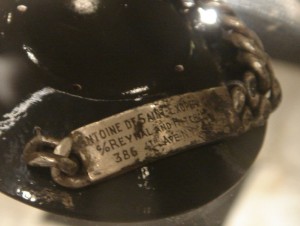 Saint-Exupéry’s bracelet found by the fisherman Jean-Claude Bianco in 1998. / Wikipedia

A Frenchman named Jean-Claude Bianco fishing east of Riou Island, south of Marseille in 1998, recovered a silver identity bracelet with the names of Saint-Exupéry and of his wife Consuelo. Two years later, a diver discovered a P-38 Lightning near the same location. The French Underwater Archaeological Department determined the Lightning was in fact, Saint-Exupéry’s aircraft.

Since discovery of the plane, many have speculated the cause of the crash—without resolution.

Note: Email subscribers, please go to my blog to view vids and photos