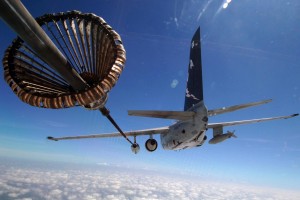 Tanking off a KS-3 Viking

A pilot spends his or her entire life avoiding other traffic (code for not hitting another airplane in mid-air). And then one day, he or she becomes a military pilot. The next thing you know, someone says, “Go up and hit the tanker.”

In radio parlance, Navy pilots call this “Texaco” and to be honest, it really is quite amazing.  After finding the tanker and getting plugged in, it is truly great to be flying along watching the gas gauge go up. You can literally fly forever and never come down.  What a wonderful thought…

Before being able to enjoy increasing gas quantities, there is the little problem of finding the tanker and “getting aboard.” After that, the next thing to do is “get into the basket.”  Then, it is merely the task of holding your jet in the proper position to put the correct pressure on the hose to assure fuel transfer.   What could be simpler?

Well, a lot of things to tell the truth. Especially if the tanking evolution we’re talking about takes place in the dark.  At night.  In the clouds.  With turbulence.  And lightning.  Oh yea, and the deck is pitching and rolling the way a 1970s waterbed would if Elvis Presley and Rodney Dangerfield were engaged in a serious wrestling match on top of it.

Yes, there are just a few little challenges involved in passing gas at altitude.  The amazing thing about it is the apparent ease with which flight crews accomplish this feat daily and nightly. 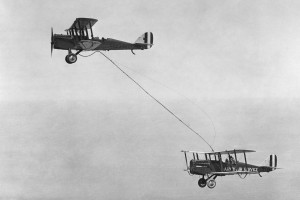 The Army Air Services flew the first in-flight refueling mission on June 27, 1923 by a team of Army aviators, Captain Lowell H. Smith, and Lieutenants John Richter, Virgil Hine, and Frank Seifert.  The aircraft were slow-moving DH-4B biplanes of the Army Air Services.  Basically, the crew of the higher biplane passed a fuel hose to the lower and the gas flowed by way of gravity via the standard fueling port.  This is probably why the Air Force still does it that way to this day; they plug into the receiver aircraft while in the Navy, the receiver plugs into “the basket” of the tanker.

While they had the concept as early as 1923, the military did not start real air-to-air refueling operations until after World War II.  Korea was the first conflict in which aerial refueling played an important part, and by the time the Vietnam War rolled around, the military guys had the process well tamed.  They also had the equipment refined to the point that for the most part, it was reliable – the majority of the time.

Unfortunately, it sometimes fails, or breaks, or a nervous pilot can incite a failure.  Then it becomes a real challenge trying to either get the airplane down, to the destination, or come up with an alternate plan involving a lot less fuel than on the tanking plan.

The key?  Just be smooth, turn off your radar so you don’t fry the tanker pilot, sit back, and relax.  It’s all good, and once you’re in the basket, you can stay up there forever.