Humor, Royalty, and The King’s Speech 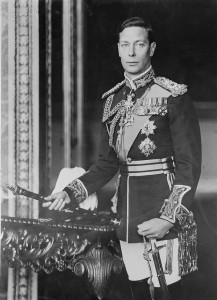 Sometimes, a story in need of telling goes beyond the imagination of the finest novelist.  History now and then provides us with the most compelling of these stories, of which occasionally, someone will say an author could not possibly have fashioned such a wonderful account.  Such is the true-life narrative of England’s King George VI.

Known as the reluctant king, Albert Frederick Arthur George became the King of England on December 11, 1936 after his brother, Edward VIII, abdicated the throne.  Edward gave up the throne in order to marry Wallis Simpson, a divorcee from America with two living ex-husbands.

A grand story behind the story was that he wrote Queen Elizabeth to ask permission to write the script.  She wrote back requesting he postpone publication until a time beyond her lifetime citing the memories “of those events is still too painful.”

Speaking Sunday on “60 Minutes,” Seidler told the story of how he began writing “The King’s Speech.” The length of time he sat on the story at the request the Queen is truly remarkable.  He also told of finding references to a man named Lionel Logue early in his research.

As he continued to study the story, he discovered Logue’s son and grandson.  From the grandson, he was able to acquire Logue’s personal notes and correspondence between the speech therapist and the king.

What Seidler discovered was not a relationship between a health professional and a patient, a commoner and a king, but rather a relationship between friends.  Seidler did a remarkable job capturing the essence of these two men.  He brings out the point that regardless of birthright, one must always possess a refined sense of humor and that friendship knows no bounds.

The movie cost an estimated $15 million and on the opening weekend in the United States, it played in only four theaters making $355,000.  Since then, the movie has grossed more than $93 million.

Additionally, “The King’s Speech” is a serious contender for the Best Picture Oscar.  This of course, will lead to others.

If you have not had the opportunity to see this movie, make the time.  You will very much enjoy the story.

As mentioned above, a novelist could not have created this story.

1 Response to Humor, Royalty, and The King’s Speech