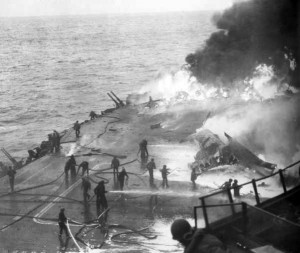 Sixty-six years ago today the USS Saratoga, CV-3, fell victim to a horrendous attack by the Japanese.  The Japanese, taking advantage of poor weather and low clouds, were able to approach the aircraft carrier at about five o’clock in the afternoon.  Six attacking airplanes dropped five bombs on the carrier within three minutes.  One hundred twenty three crewmen died or went missing.

On the flight deck, the attack heavily damaged the forward section of the ship blowing out two large holes in her starboard side.  A follow-on attack at 7 pm placed another large bomb into the ship.  In what many describe as outstanding seamanship on the part of the crew, all fires were contained in less than one hour and 15 minutes.  As a result, the Saratoga was able to conduct flight operations and recover her aircraft.

Because of this attack, Saratoga’s involvement in actual combat operations in World War II were over.  High command ordered her back to the west coast for repairs and she berthed at Bremerton, WA on March 16, 1945.

Shipyard workers began repairing the ship right away and by May 22, 1945, Saratoga left Bremerton enroute to Hawaii.  On June 3, the ship began training operations for pilots in the Hawaii area.  Those operations ended on September 6 following the Japanese surrender.

The ship’s next duties included assignment to Operation Magic Carpet.  This involved transporting military members home to the United States.  Her first run from Hawaii included 3712 naval personnel after which she returned to the theater to bring home more veterans.  By the time Operation Magic Carpet ended, the ship’s company was responsible for bringing home more than 29,000 servicemen who had fought in the Pacific during the war.

With the end of the war, combined with the commissioning of larger Essex-class carriers, the Navy declared the USS Saratoga as surplus.  Consequently, the great ship’s final assignment was to Operation Crossroads, placing the ship at Bikini Atoll.  Her last assignment was to serve as a test bed in researching the affect atomic weapons had on naval vessels.

The first test, an air burst detonated on July 1, 1946 damaged the great ship, but she survived.  The second test on July 25, 1946, sank the ship within the lagoon.

The USS Saratoga, CV-3, was the fifth ship to bear the name Saratoga.  She was a Lexington-class vessel displacing 33,000 tons and was 888 feet in length.  Her crew consisted of more than 2000; armament included eight 8-inch guns and 12 5-inch guns.  She could carry 81 aircraft.

This “Sara” would serve until August 20, 1994 with combat operations in Vietnam, off the coast of Libya, in Desert Storm, and in the area of Yugoslavia.  Today, she is on donation hold at the Naval Station, Newport, RI.