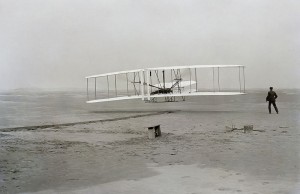 A century plus seven years. It is almost too much to comprehend, especially when you give some thought to the amazing accomplishments which have taken place since then.

It was 107 years ago today the Wright Brothers officially “cracked the code” on getting heavier than air devices into the sky. Many today pay little heed to the significance of the event; for them, the convenience of crossing the nation or an ocean in a few hours time is the most important aspect of the event.

Somehow, history has passed them by. They have overlooked the impact aviation has had on their lives and take our modern miracles for granted.

At the start of the last century, the field of aviation was almost non-existent. Very few possessed the vision to drive events beyond the first flight of 107 years ago. 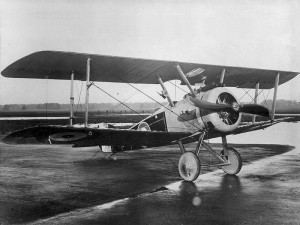 As history shows, however, a few industrious individuals became enamored with the idea of perfecting flight. At first, progress was slow, but as technology, materials, and research advanced, so also did the new commerce that would soon become the aviation industry.

History has shown over the years the greatest advancements occur during times of war and the aviation industry was no exception. When World War

I erupted in Europe, the airplanes of the times were barely able to get out of their own way, much less fight against others. At the start of the war, aerial combatants would literally fly alongside each other taking pot shots at one another with their side arms. By war’s end, the early aviators perfected aerial combat maneuvering and technologically, the airplanes advanced very rapidly. 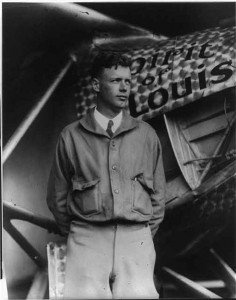 Charles Lindbergh and the Spirit of St. Louis

Between wars, it was the time of the barnstormers, the refinement of airmail, and the development of radios and instruments allowing pilots to fly in poor weather. Charles Lindbergh would fly the Atlantic on May 21, 1927 and a little over two years later, Jimmy Doolittle became the first pilot to ever takeoff, fly a course, and land an airplane completely blind – strictly on instruments.

In regards to airline aviation, the 1930s proved to be an incredible time. Today, 75 years ago and a mere 32 years after the Wright’s first flight, the Douglas DC-3 made her maiden voyage. Many of those early DC-3s are still flying today, a testament to the ruggedness of the airframe and the foresight of the engineers who designed her.
Maritime aviation allowed for the start of World War II on December 7, 1941 when the Japanese employed six aircraft carriers to deploy 360 attack aircraft and another 48 used as scouts and combat air patrol to attack Pearl Harbor.  While the Japanese only bloodied our noses, the fight was still in us and the United States returned the favor on April 18, 1942. Flying from the single aircraft carrier, the USS Hornet, 16 B-25 Mitchell bombers crewed by 79 volunteers and led by LT COL James H. Doolittle, attacked the heart of Japan. 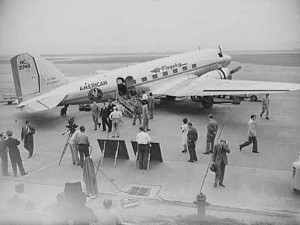 As the war escalated, so too, did the technology allowing ever greater advancement in aviation. At the start of the war, some of the aircraft in the US inventory actually included open cockpit biplanes; by the end of the war, we were flying pressurized B-29 Superfortresses and our fighters were nipping on the edge of the sound barrier, which fell to Chuck Yeager and the Air Force on October 14, 1947.

At the start of the 1950s, the Korean War erupted and so did the age of the jet fighter. Both the Russians and Chinese, as well as the United States, refined the use of jet fighters during this period. When we moved beyond the hostilities of the Korean conflict and into the mid 50s and the competition for space raged, the technological race remained as alive and well as had been in the first half of the 20th Century. 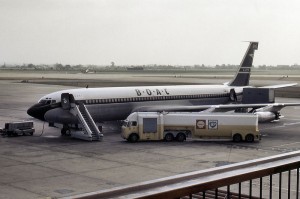 As we started stretching out beyond the atmosphere, we began designing vehicles with the potential to carry us to the moon. While the space race continued, the airline industry began to see expansion also, with the use of turbojets and the creation of the Boeing 707, aerial transportation moved from the lower altitudes to the higher flight levels.

John Kennedy was elected President and before he was assassinated on November 22, 1963, he made the proclamation the United States would go to the moon, “…by the end of this decade.” And we did. Then we went further into space, faster around the world, higher into the fringes of the atmosphere, and built airplanes of which no one in the 19th Century could have ever dreamed. 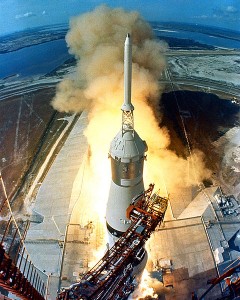 One hundred and seven years ago, the common man’s transportation depended on horses, mules, and buggies. At the time the Wrights flew, no one other than Jules Verne and H.G. Wells ever imagined we, the human race, could walk on the moon.

As we go to bed this evening of the 107th anniversary of the first flight, one wonders what humanity might attain over the next 107 years.