Whenever someone mentions the name “Corsair,” most aviation enthusiasts immediately think of the inverted gull-winged F-4U Corsair from World War II.  A few will think of the A-7 Corsair which gained fame as a light attack bomber in Vietnam.  Even fewer know of the existence of the O2U or SU-4 Corsair, the very first Corsairs.

The O2U, produced by the Vought Corporation in the mid to late 1920s, served the Navy, Marines, and Coast Guard as an observation platform.  Construction of the airplane consisted of conventional steel tubing, wood, and fabric.  A Pratt & Whitney R-1340 Wasp engine producing 400 horsepower powered the airplane.  Many of the Corsairs served as seaplanes and a few were actually amphibious.

Later in the 1930s, Vought further developed the airplane to include an upgrade to the 600 horsepower Pratt & Whitney R-1690 Hornet engine.  The Navy also re-designated the airplane as the SU-4, putting them into the role of scouts.  Performance of the airplane was typical of the biplane era.  The airplane had a maximum speed 167 mph and a limited range of only 680 miles.

The Navy used the airplane throughout the 1930s.  When Japan forced the United States into war in 1941, the fleet still maintained 141 SU-4 Corsairs.

The most famous of the Corsairs, the F-4U, began its reign in February of 1938 after the Navy requested proposals for new fighters.  Navy officials wanted an airplane with the fastest possible forward speed and a stall speed less than 70 miles per hour.  They also wanted it to carry four guns and be capable of dropping bombs.  In 1938 and 1939, Vought designed and produced a mock up of the XF4U-1 Corsair. 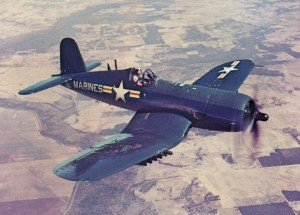 The new fighter had a Pratt & Whitney XR-2800 prototype engine installed on the aircraft.  The engine produced over 1800 horsepower and later became the Double Wasp engine of 2000 horsepower.  The first flight of this Corsair took place on May 29, 1940.  The pilot, Lyman Bullard, terminated the flight early because of aerodynamic flutter with the elevator trim.

The Navy encountered other problems with the airplane during carrier suitable trials. Even after the problems were resolved, many still considered the airplane as “a handful” for the less experienced pilots.  As always, naval aviators proved adaptable and the airplane went on to become one of the most successful of World War II and the Korean War. 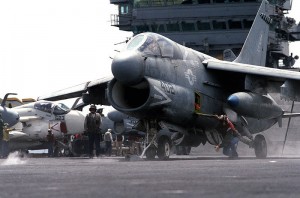 The last airplane carry the moniker “Corsair” for the U.S. Navy was the A-7 series.  Vought designed the A-7 Corsair II light attack aircraft as a replacement for the A-4 Skyhawk.  Initial work on the design began in 1962.  Vought based the design of the aircraft on the F-8 Crusader.  Compared to the Crusader, the Corsair was shorter, less powerful, slower, and stubby in appearance.  Many also considered the airplane “uglier.”

Beginning in 1967 and through 1971, 27 Skyhawk squadrons converted from the A-4 to the new A-7s.  In that first year, VA-147 based aboard the USS Ranger, took the airplane into combat for the first time in Vietnam.

The Corsair II served the United States Navy well from Vietnam, to Granada, Libya, Panama, and Iraq.  The Navy retired the last of the Corsairs in 1991 when the last A-7Es returned home from Desert Storm.

1 Response to The Navy Corsairs