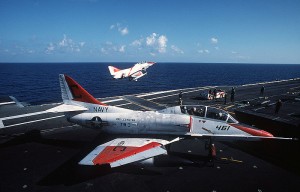 Both airplanes were great fun to fly.  The A-7 was a workhorse compared to the A-4 in terms of the load it could carry, but if you were going to go fly and just rip around the sky, nothing was better than Ed Heinemann’s little hotrod.

The A–4 taught generations of naval aviators a lot about flying.  Many of us completed our “Strike” training in the TA-4J Skyhawk to attain our Wings of Gold.

The A-4 first flew on June 22, 1954 and enjoyed a production run until 1979.  During that time, Douglas Aircraft delivered almost 3000 airplanes to various military forces, including 555 two-seat trainers.

Douglas supplied variants of the aircraft to fit the needs of the Marines in context of electronic warfare and their specific attack mission.  During Vietnam, the A-4 was one of the mainstays of naval aviation, flying from the decks of carriers in the Gulf of Tonkin against targets in North Vietnam. 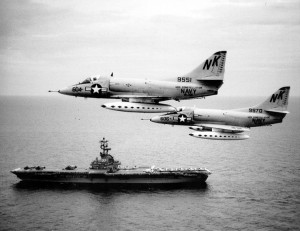 The airplane really was a kick in the pants to fly.  She had a maximum speed of 585 knots (673 mph) powered by a Pratt & Whitney J-52.  A pair of drop tanks could take the airplane almost 2000 miles.  The airframe was good for -3gs up to +8g.  One of the most spectacular things the airplane could do well was roll.  At the best working speed, she could roll 720 degrees per second.

The memories I enjoy most of the airplane involve lots of speed, lots of g, formation flying, shooting guns and missiles, and dropping bombs.  The airplane did all of those things with aplomb.  I particularly enjoyed dropping things.

For instance, the airplane did commendably as a manual bomber dropping Mk 82 general purpose bombs.  To go out with a couple of TERs (triple ejector racks) with three Mk 82s each and drop a couple of bulls eyes on the bombing range was very satisfying.  It was very similar to going to a pistol and rifle range and practicing your marksmanship – the difference between shooting and bombing is that in the case of bombing, you sort of ride the bullet for a while on the way to the target.

Something else I really enjoyed with the airplane was air combat maneuvering (ACM), otherwise known as dogfighting.  ACM was a lot like a huge three dimensional game of chess.  In chess, there is a lot of mental activity taking place in your cranium when you go up against an opponent.  In ACM there’s a lot more mental activity combined with science, physics, physical brawn, and patience – a lot of patience.

Don’t be misled by the idea of patience in a dogfight.  Most dogfights only last about 30 seconds to maybe a minute, a minute and a half perhaps.  During that time, however, the concept of time stands almost completely still.  And this is where the idea of patience comes into play.  For a fighter pilot to take advantage of his opponent and win he has to carefully fly the airplane on the edge of the performance envelope and you have to be patient with small gains on your opponent until you can get into the kill position. 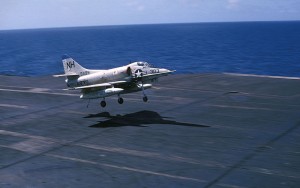 Trapping on the Kitty Hawk

But for those of us flying airplanes like Ed’s hotrod, nothing was more rewarding.