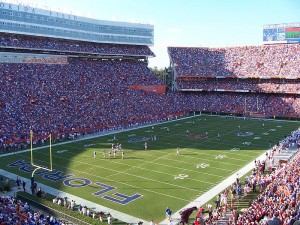 This special day has come.  September 4, 2010 – the opening game of the 2010 Gator Football Season!  At high noon, Miami will take on the Florida Gators in “the Swamp.”  Check it out on ESPN.  So many University of Florida students and Gator fans all around the world have been looking forward to this day since the last time our team took the gridiron last season.

There is no question the Gators have done great.  For more than 20 years, the University of Florida football team engaged in bowl games at the end of every year.  In the years 1992, 1999, and last year, the Gators held Division Champions titles.  The team also won the NCAA Division 1 championship games for the years 1996, 2006, and 2008.  Based on statistics and their record, they are a great team.  Over the lifetime of the Florida Gators, they have won 653 of 1027 games.

The last losing season for Gator football occurred during the 1979 season after Charley Pell took over as head coach.  That year was the worst year ever for a Gator football squad with a 0-10 season.  Since that losing season, the University of Florida had a breakeven season during Galen Hall’s 1987 period when the team went 6 and 6.

In 1990 former Gator quarterback Steve Spurrier took over the helm of the UF team.  During the 11 years Spurrier led the Gators, he took the team to victory in 81 percent of all the games he coached.  This led to an 86 percent winning record in conference games.  All seemed lost when Spurrier decided to leave after the 2001 season to coach the Washington Redskins.

Over the next three seasons, Ron Zook took over the position of head coach.  During this period the team went 23-15 with only 16 conference wins.

Coach Urban Meyer took over in 2005 and has since led his team in winning 85 percent of the 67 games played since September 2005.  This includes 79 percent of the 43 conference games during this period.

Over the past three years, Meyer has had the help of Tim Tebow.  Between the two, not only did they bring an incredible winning record to the team, they also imparted lessons in integrity to many associated with the game.

This year will be an interesting year without Tebow.  Still, given the stats, it should be another winning season for Coach Meyer and Florida.