Doing It the Old Fashioned Way

Well, I guess I have graduated from the School of Geekdom at the University of Hardknocks. Following this past week’s computer emergency, with the help of some friends, a couple of manuals, and the Internet, I was able to teach myself enough to recover all my data and actually fix my computer. It’s not over yet; there is still much to do with re-loading various software programs and finding or remembering certain passwords. The scary thing is realizing I can actually think like a computer geek.

In the process, I realized that we, the current citizens of the blue-green orb ferociously spinning and orbiting the big yellow marble once a year, have possibly become too dependent on technology. One wonders how ancient man made it. How were they able to function without Microsoft and Apple?

How did the ancient Polynesians find their way to Hawaii without Garmins, Trimbles, or their Tom-Toms? How could they repeat the process so many times?

Hundreds of years later on the other side of the world, the Vikings, Spaniards, English, French, and Portuguese sailed across the Atlantic to explore the New World. Again, they did this without the use of modern technology, by today’s standards.

We have become so accustomed to using technology to accomplish our work and live our lives that we have forgotten how to do it “the old-fashioned way.” Technology has invaded every facet of our lives. When I speak of technology, I refer to the following graph, made possible by the use of … well … technology. 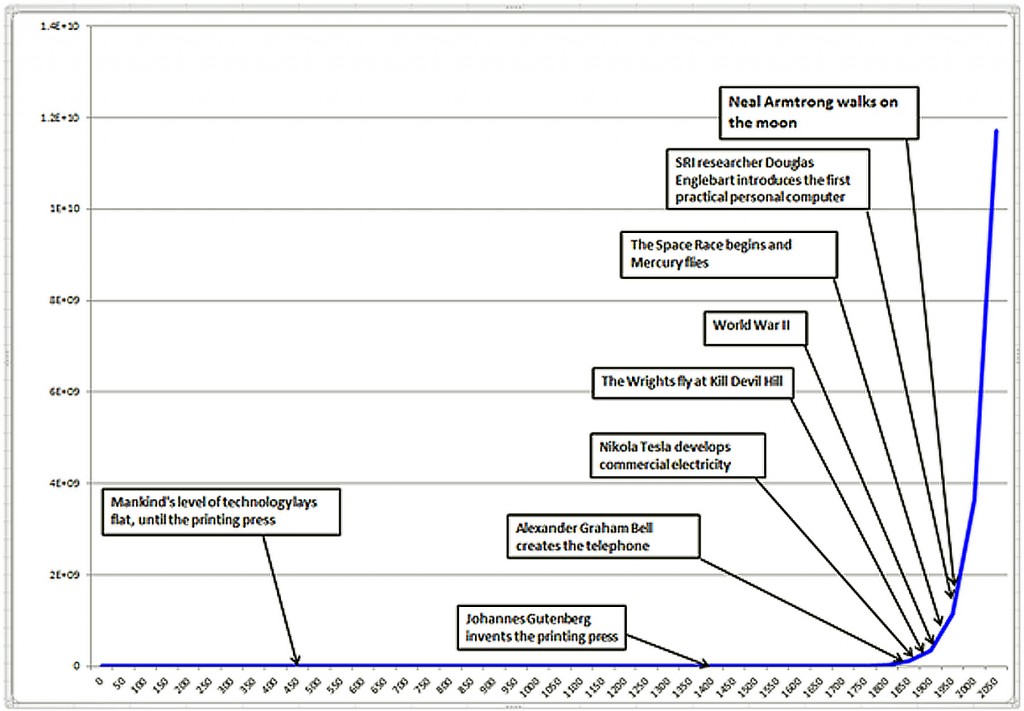 An illustration of where technology is headed

For a long time, according to Western views, knowledge and man’s ability to use technology remained relatively non-existent. The knowledge of history passed from one generation to the next by storytelling. While China was the first to invent paper and a true woodblock printing press, it was not until Johannes Gutenberg invented his version of the printing press that westerners began acquiring a sense of collective history. In the latter 1800s, Alexander Graham Bell invented the telephone, Nicola Tesla began perfecting commercial electricity, and Thomas Edison conceived the light bulb.

Shortly after, in 1903 the Wrights flew their heavier than air flying machine at Kill Devil Hill near the beaches in North Carolina. Afterwards, the imagination of humans really seemed to increase and the curve started becoming exponential.

The faster technology increased, mankind acquired and retained more knowledge easier than any time before. As the global community plunged into World War II, the need for more technology increased. The military and universities throughout the world met the demand.

By the end of the war, rocket science was born. The Germans used the V-1 “Buzz Bomb” and the V-2 rocket to terrorize the English near the end of the war. (See The Last V-bomb Casualties.) This led us into the 1950s, to the beginning of the space race.

Today young people are expert with their smart phones, digital cameras, computers, and more. All of these things make our lives more productive and easier. We can do things with technology that were impossible in the past. The question now becomes, can we still do the job without the technology?

A friend of mine, another journalist, emailed me a very interesting article. It was the account of a journalism class challenged to put out their last publication of the year without using modern tools and technology. They had to complete the task without computers and magical software.

As my friend pointed out, the interesting point of the article was that while journalists recorded the history of the world around them, they failed to record how they once did their jobs of preparing the news and presenting it to the public. There was a day when reporters banged on manual typewriters, developed black and white prints, measured by column inches, and use proportion wheels. All of these tools and the art of producing a newspaper or magazine with them are gone.

Like the ancient sailors who plied the seas under sail, the steam locomotive engineers who understood steam engines, the old journalists who wore fedoras with press credentials stuck in the headband are now a mere memory in all of our minds. Contemporary reporters do not understand the old ways and cannot effectively do the job without today’s technology. Many have said the same of other occupations.

When it comes to flying, a similar concept holds true of the modern day pilot. Some pilots are almost incapable of operating an aircraft without technology. On occasion, pilots have refused to fly if a part of their technology failed or was working improperly. The NTSB files contain too many instances of aviators who crashed perfectly good flying machines because a technological gadget in the cockpit was consuming their concerns.

It is the perceived mean, old, cantankerous flight instructor who makes his or her students into damn good pilots. He or she does this by emphasizing the foundational skills of flying the airplane—with and without—modern technology. Sometimes the student doesn’t understand the why in the middle of training. It is only later, when faced with an in-flight emergency, do they come to understand and appreciate the old instructor’s efforts.

In Ernest K. Gann’s flying memoir, Fate is the Hunter, Gann writes about his mentor during the DC-3 days, Captain Ross. After a particularly grueling flight, Ross looked at a rattled Gann as they left the airplane and said, “Anyone can do the job when things are going right. In this business we play for keeps.” If you have not read Gann’s Fate is the Hunter, you should. I read this book a long time ago at the beginning of my aviation career. Gann’s recounting of the lesson he learned from Ross is timeless for all pilots.

While I enjoy my technology, I have always remembered Captain Ross’ lesson.

5 Responses to Doing It the Old Fashioned Way