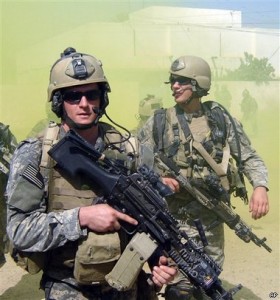 Today Michael Monsoor would have been thirty years-old. He was born in Long Beach, CA and was the third child of four. Michael was a typical California kid, playing tight end on the Garden Grove High School football team. He graduated from the school in Garden Grove, CA in 1999.

Michael liked snowboarding as well as body boarding the waves of the Pacific Ocean. He drove a Corvette and he enjoyed riding motorcycles. He was a quiet young man, dedicated to his family and friends. The son of a former Marine, Monsoor enlisted in the Navy in March of 2001.

After enlisting, he traveled to Great Lakes, IL for basic training. Afterward, he attended Quartermaster “A” School, following which, the Navy stationed him at NAS Sigonella, Italy. From there, Michael later traveled to Coronado, CA to enter Basic Underwater Demolition/SEAL training. He graduated on September 2, 2004 as one of the best in his class. The Navy assigned Michael Monsoor to Delta Platoon, SEAL Team Three.

In April 2006, SEAL Team Three deployed to Iraq where they were involved in training Iraqi soldiers in Ramadi. During the course of his service, Michael worked as a communicator and machine-gunner on the team.

On May 9, 2006, Michael helped a teammate who had fallen on the street wounded by insurgent gunfire. Under a hail of bullets, Monsoor raced into the street to save his friend. This was typical of Michael’s selflessness and dedication to his team. For his action, he would win the Silver Star. In addition to the Silver Star, Michael would also receive the Bronze Star for service in Iraq.

On September 29, 2006 in Ar Ramadi, Michael Monsoor and his team had taken a rooftop position during a firefight with insurgents. While he and two other team members took cover from fire, an insurgent threw a grenade at their position. The grenade bounced off Michael’s chest falling among the three SEALS. Michael, standing near the only avenue of escape, could have saved himself.

Instead, he gave his life to save his fellow teammates by dropping onto the grenade to shield his friends.

A grateful nation laid Michael to rest in the Fort Rosecrans National Cemetery. In a most moving funeral, as Michael’s coffin moved from the hearse to the gravesite, Navy SEALS formed columns on both sides of the path of the pallbearers. As the coffin passed, each SEAL removed his Golden Trident from his own uniform and slapped it into the wood of Michael’s coffin.

The route from the hearse to the grave was very quiet, very solemn. During that time, the only sound evident was the slaps of the Tridents each SEAL imbedded into Michael’s coffin. It was a very moving experience. President Bush would later say, “The procession went on nearly half an hour, and when it was all over, the simple wooden coffin had become a gold-plated memorial to a hero who will never be forgotten.”

Three days after his birthday in 2008, the nation posthumously awarded Michael the nation’s highest tribute, the Medal of Honor. Michael’s parents received the medal on Michael’s behalf in the White House ceremony.