Fighting FIVE Takes the US Navy into the Jet Age 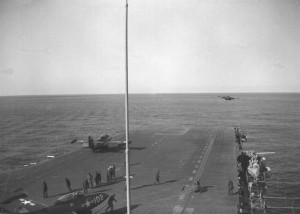 VF-51 Panthers aboard the USS Essex

Sixty-three years ago today, Fighter Squadron FIVE became the first Navy squadron to land jet fighters aboard an aircraft carrier.  On March 10, 1948, they took their brand new North American FJ-1 Fury jets to sea to land aboard the USS Boxer.

The squadron has a very long history in Naval Aviation.  Their squadron insignia, a depiction of a screaming eagle is traceable back to 1927 when the Navy first established VF-3S, The Striking Eagles.  At that time, they flew the Curtis F6C-4 Hawk.

Official activation as a squadron for VF-51 occurred on February 1, 1943 when the Navy designated the squadron as VF-1; they became re-designated as VF-5 later that same year.  The squadron finally acquired the designation of VF-51 on August 16, 1948 and remained as VF-51, The Screaming Eagles, until retirement in March 1995.

The Screaming Eagles history includes action in World War II, the Korean War, and Vietnam.  After acquiring the Fury, the squadron transitioned to the Grumman F9F–2 Panther.  Again leading the way, VF–51 took the Panther into combat for the first time, scoring the first air-to-air kills in the jet age and the first of the Korean War.  The ship on which they deployed was the USS Essex.  During the Korean conflict, one of the pilots who would go on to greater fame a decade and a half later was Neil Armstrong.

From the Panther, the next fighter The Eagles would transition into was the last of the true gunfighters, the F-8 Crusader.  Again proving their leadership among all the fighter squadrons of all the fleets, the pilots of The Screaming Eagles took on the task of evaluating the Crusader’s air-to-ground capabilities.  Flying from the deck of the USS Ticonderoga, the warriors of VF-51 again proved themselves well in combat during the Vietnam conflict.  According to the squadron history, because of their excellence in performing the evaluations, the Navy selected VF-51 to fly secret missions into Laos.  During this time, the squadron shot down two Mig-21s while flying the Crusader. 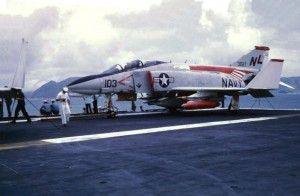 Returning home from the war for a short time, the men of the squadron transitioned from the Crusader to the new McDonnell-Douglas F-4 Phantom.  The squadron completed this transition in time to return to the war aboard the USS Coral Sea.  While engaged in the last months of the Vietnam War, F-4s flown by Screaming Eagle pilots shot down four Mig-17s.

In June 1978, VF-51 traded in their Phantoms for new F-14A Tomcats.  One year later, the squadron deployed with their new airplanes aboard the USS Kitty Hawk.  After two cruises, the squadron moved to the east coast deploying aboard the USS Vinson.  After returning to the west coast, VF-51 along with VF-111, their sister squadron, took part in the filming of Top Gun. 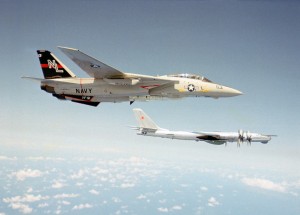 Originally, the Navy slated VF-51 and VF-111 to transition into the new F-14D Tomcat.  However, it was not to be.  Plans changed and in March 1995 The Screaming Eagles and the Sundowners became a part of history.