It Was Easy Enough 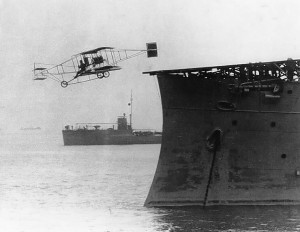 Eugene Ely was a pioneer aviator in the very early days of aviation.  Ely was born in Williamsburg, IA on October 21, 1879 and was only 31 years old when he became the first pilot to take off from the deck of a United States Naval vessel.

After graduating from college, Ely moved to San Francisco where he started working in the new automotive industry.  He was in sales and he also raced automobiles.  He became interested in flying after the man for whom he worked purchased a Curtiss biplane.  Ely believed flying was as easy as driving a car and offered to fly the biplane for his boss.  After crashing it, Ely was inclined to purchase the wreck out of a sense of guilt.

He repaired the damaged Curtiss biplane and actually learned how to fly properly.  He became active in demonstration flights in the Pacific Northwest.  Then in the summer of 1910, he and his wife, Mabel, moved to Minneapolis, MN.

It was about this time Ely and Curtiss met Captain Washington Chambers of the United States Navy.  The Navy tasked Chambers with investigating the possibility of military use of airplanes within the Department of the Navy.  This led to discussions of shipboard operations for aircraft with Ely and Curtiss. 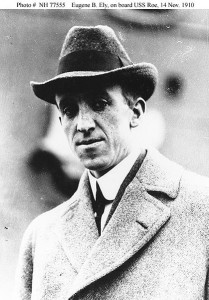 On November 14, 1910, Ely became the first pilot to fly an aircraft off a ship.  Sailors constructed a temporary elevated platform on the foredeck of the USS Birmingham enabling Ely to fly the Curtiss Pusher off the deck.  The plan called for a takeoff and then landing at the Navy Yard in Norfolk.

Following the launch, the Curtiss Pusher and Ely nearly ended up in the bay.  Although the wheels skimmed the water, Ely manage to climb away safely.  Consequently, he decided to land the Curtiss Pusher on the beach rather than fly to the Navy Yard.

A little over two months later, Ely flew his Curtiss Pusher out to the USS Pennsylvania, anchored in San Francisco Bay.  The landing, which took place on January 18, 1911, was the first ever to use a “tailhook.”  From the very beginning, all aircraft landing aboard ships would use a similar tailhook system, originally designed by Hugh Robinson, an aviator who also worked as a circus performer.

After the landing, Ely spoke to the press.  His statement?  “It was easy enough. I think the trick could be successfully turned nine times out of ten.”

Thank goodness that over the last 100 years, United States Navy has done a much better job than “nine times out of ten.”

2 Responses to It Was Easy Enough